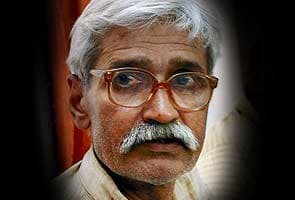 Patna: The killing of Ranvir Sena chief Brahmeshwar Singh has once again brought into focus the caste killings of Bihar in the 1990s, a period which Chief Minister Nitish Kumar describes as the dark ages for the state. Over the last two days, the Bihar government has struggled to cope with the aftermath of his death, with violence breaking out in Singh's native place of Bhojpur and in Patna, where the Ranvir Sena chief was cremated on Saturday.

Containing the fallout of Brahmeshwar Singh's death will perhaps be Nitish Kumar's biggest challenge yet, in his seven-year term so far.

An upper caste farmer from the Bhojpur district, Brahmeshwar Singh played a key role in the bloody caste wars, between upper caste landowners and landless Dalits. Also 1000 people were killed in the violence.

Singh headed the Ranvir Sena, which was formed in the 90s by the merger of all upper caste private militias in Bihar; they spared no one, not even women and children.

The Sena insisted the killings were in retaliation to the murders of landowners by Maoists and justified the violence saying their targets were Dalits and lower castes who supported Red terror.

Today, the bigger question is: Who killed 67-year-old Singh?

Just out after nine years in jail as an accused in the deaths of 21 Dalits in 1996, Singh was on his morning walk when he was killed. And political blame game began almost instantly.

"Brahmeshwar Singh was a big name. If he had been shot in my tenure, everyone would have jumped at me and said I have got him killed," said RJD president Lalu Yadav.

"This has been done by people who are frustrated with good governance in Bihar. They do not know what to do and so they have resorted to this killing," said Shivanand Tiwari, spokesman of the ruling Janata Dal (United).

The ruling party's nervousness is clear. For seven years, since Nitish Kumar came to power, his government has ensured there has been no major incident of caste violence in a state once known for such incidents. On the back of improved law and order and some administrative reforms, the Bihar Chief Minister loses no opportunity to project his state as 'Brand Bihar' these days.

But With Brahmeshwar Singh's killing, fears of retaliation by the powerful landowners - supporters of the Ranvir Sena in its heyday - are back.

"Yesterday, Patna was virtually lawless. But I don't think Bihar will go back to the dark ages, because the last seven years have seen the presence of a government that is willing to mediate between various classes and castes," said Shaibal Gupta, Head of the Asian Development Research Institute.

Promoted
Listen to the latest songs, only on JioSaavn.com
The next few days are likely to be critical for Nitish Kumar's administration. The state has been put on high alert, and top police officials have been asked to stay around the area where Singh was killed, for at least a month. The next few days could well be the biggest indicator of how far Bihar has really moved from those bloody years.