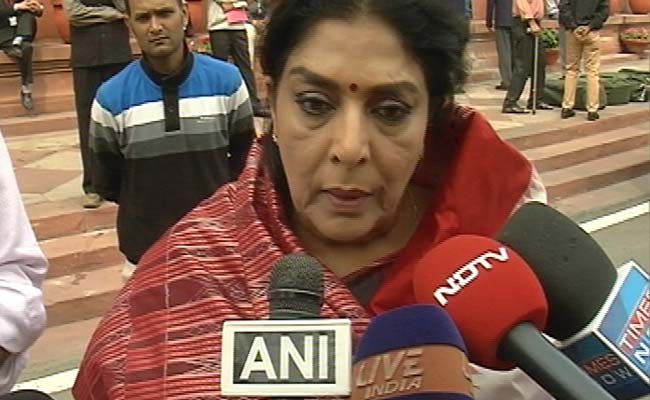 The Telangana Police have registered a case of cheating and also under Prevention of Atrocities Against SC/ST Act against Congress MP Renuka Chowdhury for allegedly taking a bribe of Rs 1.10 crores from an aspiring election candidate.

The wife of Ramjee Naik, a local Congressman and tribal leader, has alleged that in exchange for money, Ms Chowdhury promised an assembly ticket to her husband for last year's state elections, which was not given to him.

Ms Chowdhury, 60, said on Friday that the allegations are "bizarre." She told NDTV, "The high court is following a process. I will fight it legally."

The case was registered following an order from the Hyderabad High Court on a complaint by Dr Naik's wife, B Kalavati, who has also alleged that her husband had died because he was weighed under the pressure of the debts they incurred to raise the money.

Mrs Naik has alleged that the Congress ticket for the Wyra assembly seat in Khammam was promised to her husband by Ms Chowdhury.

The First Information Report, which was registered on March 16, alleges that the bribe was paid on May 30, 2013. Elections in an undivided Andhra Pradesh were held along with the national elections in May last year.

Promoted
Listen to the latest songs, only on JioSaavn.com
The state of Telangana came into being on June 2.

The Congress won just 18 of Telangana's 119 assembly seats, with the Telangana Rashtra Samiti winning 73 and forming government. The Wyra seat was won by the TRS.