The BJP has been targeting the 48-year-old Congress chief ever since he decided to contest from Wayanad late last month. 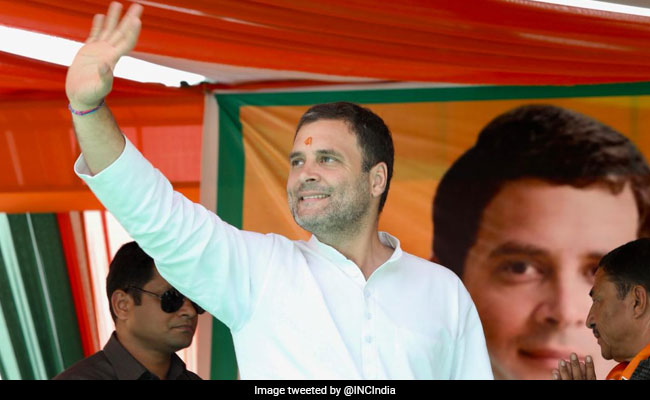 Rahul Gandhi will be accompanied by Sonia Gandhi and Priyanka Gandhi Vadra on Wednesday.

Congress president Rahul Gandhi will file his nomination to the Amethi parliamentary constituency in Uttar Pradesh on Wednesday, news agency PTI quoted a party spokesperson as saying today. He will complete the electoral formality amid a raging controversy over his decision to contest from a second seat - Wayanad in Kerala - in the upcoming Lok Sabha polls.

The party president will also hold a roadshow in Gauriganj town - the administrative headquarters of Amethi - the same day, said Congress district unit spokesperson Anil Singh. According to a letter by the Special Protection Group to the Amethi district magistrate, he will be accompanied by his mother, Sonia Gandhi, and sister, Priyanka Gandhi Vadra.

Rahul Gandhi, who has represented the constituency for over 15 years, will face Smriti Irani of the BJP on May 6. He had defeated her by over one lakh votes in 2014.

The BJP has been targeting the 48-year-old Congress chief ever since he decided to contest from Wayanad late last month. The foremost among them was Ms Irani herself, who termed the move as an insult to the people of Amethi. "A person who rode on Amethi's shoulder to enjoy power for the past 15 years has decided to leave his supporters and file nominations from another constituency. This is an insult to Amethi and a betrayal of its people," she said.

Prime Minister Narendra Modi claimed that Rahul Gandhi had chosen the seat because it was dominated by minorities. "The Congress dynast went out with a microscope to look for a safe seat, and selected a seat where the majority is in minority," he said at a rally in Maharashtra's Nanded on Saturday.

The Congress, however, maintains that it's not fear of losing but confidence in his winning capability that spurred the party chief to pick a seat in Kerala. "Rahul Gandhi has made a bold statement of intent," said Congress leader Shashi Tharoor yesterday. "But can Narendra Modi make such a claim? Would he have the courage to fight for a seat in Kerala or Tamil Nadu?"

Sources said Rahul Gandhi picked Wayanad because he wants to strengthen the party's presence down south, and the constituency shares its borders with both Tamil Nadu and Karnataka.