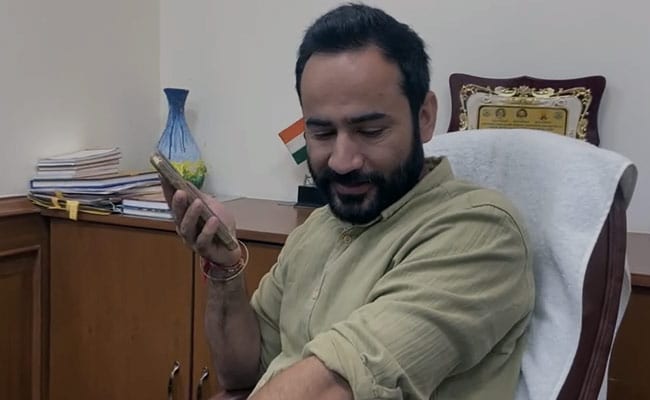 Punjab Sports Minister Gurmeet Singh Meet Hayer has come out in support of Indian cricketer Arshdeep Singh, who is being brutally trolled for a missed catch in the India-Pakistan T20 nail-biter in Dubai last night.

The 24-year-old medium pacer from Punjab's Mohali dropped a crucial sitter in the Asia Cup match that ended with Pakistan clinching victory with five wickets in hand and one ball to spare. The cricketer has been mercilessly trolled for the missed catch, with a section of social media users blaming him for the defeat.

In a message of solidarity to the cricketer's mother, the minister told her over the phone, "If you are given the ball in the death overs, then it signifies that the skipper trusts you. Everyone has their good and bad days. Sports should be treated like it is. He has performed in every game. You and me will go to receive him at the airport."

Responding to the criticism of her son's performance in last night's match, Arshdeep's mother said: "See, even (Virat) Kohli had a slump in the previous matches, and he just got back to form. I have asked him (Arshdeep) to return with the Cup."

Mr Hayer told Arshdeep's mother: "You ask Arsh to focus on the game and once he returns after winning the game (the final), we will receive him with pomp and show."

Former Punjab Chief Minister Captain Amarinder Singh also weighed in for the young Punjab bowler. In a Facebook post, Mr Singh said: "Quite unfortunate that Arshdeep Singh is being mocked at for a dropped catch. Such things happen in sports, particularly under such tremendous pressure. We must support and encourage our sports heroes."

In an attempt to cheer up the left-arm bowler, Mr Singh further said: "Arshdeep, don't get disheartened. You have a long and glorious career ahead."

Criticising the way Arshdeep has been trolled for the dropped catch, Mr Hayer said: "Regressive psyche to troll him for dropping just a catch. Arshdeep is future of the nation. Inspiration for youth. Hate has no place in sports.

Victory or defeat is given in game. @arshdeepsinghh is upcoming star who carved out niche in short span. Performed excellent against Pakistan. Regressive psyche to troll him on drop of just a catch. Arshdeep is future of Nation. Inspiration for youth. Hate has no place in sports.

In his post-match comments, former India captain Virat Kohli, the top scorer for India in the match, said: "Anyone can make that mistake, the situation was tight. It was a high-pressure game and mistakes can happen. I still remember, I was playing my first Champions Trophy and the match was against Pakistan. I had played a very bad shot against Shahid Afridi. I was watching the ceiling till 5 am, I was not able to sleep, and I thought my career was over, but these things are natural."

Former Pakistan captain Mohammad Hafeez also stood by the Indian bowler, saying: "My request to all Indian team fans. In sports, we make mistakes as we are humans. Please don't humiliate anyone for these mistakes."

Punjab Youth Congress President Brinder Dhillon has also come out in support of the young bowler. In a tweet, Mr Dhillon said: "Registration of case and investigation at the earliest against people hitting the sentiments of Punjab as well as all who love this game. He (Arshdeep) represents India and there is no big nationalism than this. Rise up above party and stand for him by bringing the culprits to jail."

registration of case against all those hurting the sentiments of all of us. There is no bigger nationalism then representing the country and let us rise above everything to support this sporting hero.#WeStandWithArshdeep and bring those culprits to jail for defaming him.

Meanwhile, Dr Daljit Singh Cheema, the Spokesperson for Shiromani Akali Dal in Punjab, has also demanded that a case should be registered against those found guilty of trolling Arshdeep. He tweeted: "Government should register a case and take action against all those spreading hatred."

Govt should register case and take action against all those spreading hatred against cricketer Arshdeep Singh in social media. Social media companies should ban all offenders from social media sites. pic.twitter.com/whUWfDOR7e