Ahead Of State Polls, Jharkhand Defections A Big Blow For Congress

Among the opposition defectors are Sukhdev Bhagat and Manoj Yadav from Congress, Kunal Sarangi and JP Patel from Jharkhand Mukti Morcha and Bhanu Pratap Shahi from Nav Jawan Sangharsh Morcha. 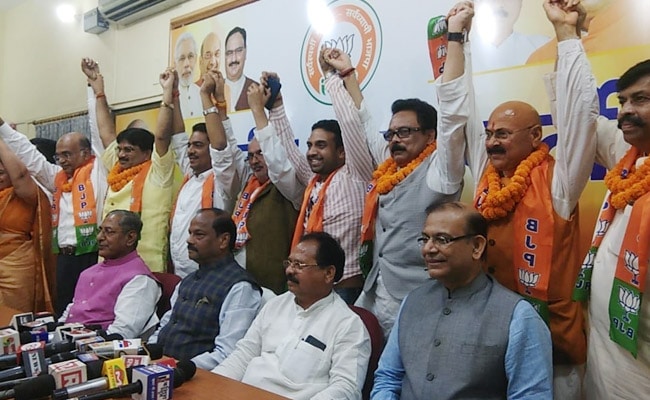 Five opposition MLAs in the Jharkhand Assembly joined the BJP today in presence of Chief Minister Raghubar Das. Of them, two are from the Congress, two from the Jharkhand Mukti Morcha and one an Independent MLA. Former Jharkhand police chief Dinesh Kumar Pandey, who retired from service this year, and former IAS officer Suchitra Sinha, also joined the BJP at the same programme, held at state capital Ranchi.

Among the opposition defectors are Sukhdev Bhagat and Manoj Yadav from Congress, Kunal Sarangi and JP Patel from Jharkhand Mukti Morcha and Bhanu Pratap Shahi from Nav Jawan Sangharsh Morcha.

The exits come as a blow to the opposition, especially the Congress, in view of the assembly elections slated for December.

Six-time MLA Manoj Yadav has a huge following in Darkatha. Sukhdev Bhagat is a former chief of the party's state unit and represents the Lohardaga constituency. Both leaders had managed to retain their seats in 2014, at the height of a BJP sweep following the Lok Sabha elections.

Mr Sarangi had won from Bahragorah constituency and Mr Sahi is a two-time MLA from Bhavnathpur seat. Mr Sarangi's father Dinesh Sarangi was a minister in the NDA government in the state led by Babulal Marandi and Arjun Munda.

Congress state president Rameshwar Oraon said, "We are not worried about these defections as both leaders have proved that they had no principle. The party gave them everything and despite that, they deserted us".

"All these people have joined the BJP to give a stable government in the interest of society and the state. They believe in the BJP's ideology, which is a happy message to the state, as the people of the country and the state has rejected dynastic politics," Mr Das was quoted as saying by news agency Press Trust of India.

The party's election co-in-charge of the state Nand Kishore Yadav and former union minister Jayant Sinha were also present on the occasion.

India Reaches Out To US Companies Over Investment In Pharma Sector