Mr Pandey had taken voluntary retirement last month, and with the government ready to waive the three-month customary cooling-off period, he was ready to launch himself into public life. 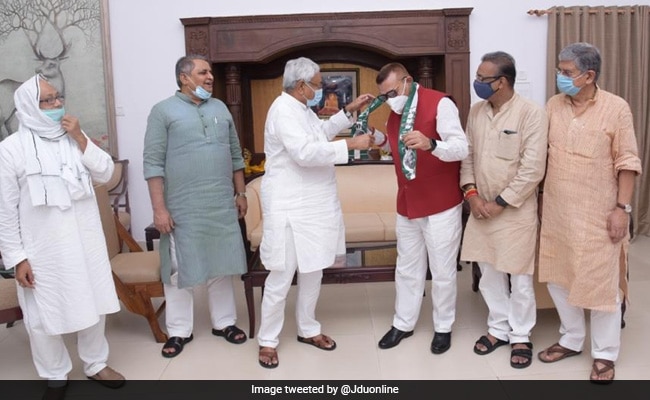 Gupteshwar Pandey, the former police chief of Bihar who quit the force last month and was seen as priming himself for the election, will not be contesting this time. Mr Pandey had joined the Janata Dal United led by Chief Minister Nitish Kumar. But his name was missing from the complete list of 115 candidates of the party announced on Wednesday.

The former police chief turned out to be second time unlucky. His attempt to contest the elections from Buxar parliamentary seat in 2009 was not successful either. This time, the Buxar seat went to the BJP as part of the seat share deal with JD(U) and the party did not make any effort to accommodate him.

Contending that he was "upset with the phone of many of my well-wishers," Gupteshwar Pandey wrote in a Facebook post: "After my retirement, everyone expected that I would contest the election but this time I am not contesting the assembly elections. There is nothing to be disappointed about. Be patient. My life has been spent in struggle. I will be in public service all my life."

"I salute all the brothers and sisters, mothers and youth of my native land Buxar," he added.

Mr Pandey had taken voluntary retirement last month, and with the government ready to waive the three-month customary cooling-off period, he was ready to launch himself into public life.

A laudatory video had soon surfaced on Youtube, titled "Robin Hood of Bihar" , which became an instant hit.

In an interview to NDTV, Mr Pandey had just stopped short of announcing that he would contest. "What's the harm if I join politics? Is it unconstitutional, unethical or illegal?" he had questioned instead.

"I was called by CM himself and asked to join. Whatever the party asks me to do, I will do. I don't understand politics. I am a simple person who has spent his time working for the downtrodden section of society," Mr Pandey had told media.

The former police chief had been at the forefront of the Sushant Rajput case, which was dragged into the political arena ahead of the election. Not only had Mr Padey nudged the case all the way to the Supreme Court, his statements defending Chief Minister Nitish Kumar had drawn attention for being unusually political for an IPS officer.

His comment on Sushant Rajput's girlfriend Rhea Chakraborty – that she did not have the aukat (stature) to criticize Chief Minister NItish Kumar – had brought condemnation.

The Congress had taunted Devendra Fadnavis, the BJP's election in-charge in Bihar, saying the BJP ally, Janata Dal United, must not give Mr Pandey a ticket to contest.