Apache Choppers India: The Apaches are meant to progressively replace the IAF's legacy fleet of Russian Mi-35 choppers which are nearing the end of their service life.

Eight US made Apache AH-64E attack helicopters joined the Indian Air Force (IAF) fleet today in Pathankot, in a major boost to India's combat capabilities. A priest performed rituals in front of a helicopter, which was also given a "water cannon salute" at the Pathankot Air Force base.

"It is one of the most fierce attack helicopters in the world. It is capable of performing many missions. Today with the induction of Apache AH-64E, the Indian Air Force has upgraded its inventory to the latest generation of attack helicopters," said Air Force chief BS Dhanoa at the event.

In 2015, India had signed a multi-billion dollar contract with Boeing for the supply of 22 of these choppers, widely considered the most advanced helicopters of their type in the world.

The Apaches are equipped with hellfire missiles and rockets. Each helicopter has the capacity to carry eight such missiles. It also has a canon gun that can fire 1,200 rounds at a time, with which two missile pods carrying 19 missiles each can be fixed. 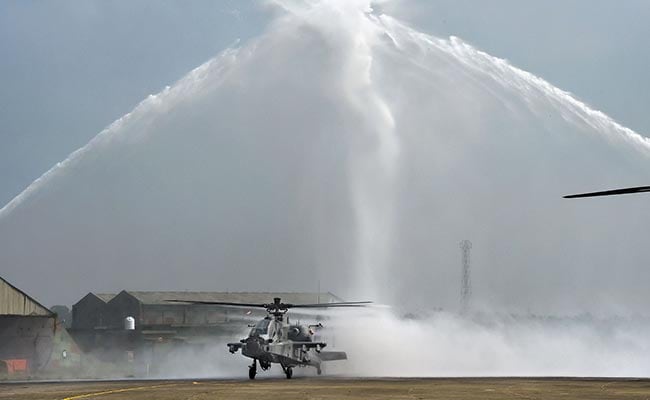 The Apaches are meant to progressively replace the IAF's legacy fleet of Russian Mi-35 choppers which are nearing the end of their service life. The choppers, which fire anti-armour missiles, are meant to take out tanks and hardened targets in the Rajasthan desert.

They are equipped with advanced sensors to enable them to detect and engage their targets while flying very low and at high speeds to evade detection by enemy forces. They can also transmit and receive battlefield pictures to and from the weapon systems through data networking.

The AH-64E Apache for the IAF completed successful first flights in July 2018. The first batch of IAF crew began their training to fly the Apache in the US last year.

"It is the only available combat helicopter with a spectrum of capabilities for virtually any mission requirement. For the AH-64 E, this includes greater thrust and lift, joint digital operability, improved survivability and cognitive decision aiding," the Press Trust of India quoted Boeing as saying.

"It is uniquely suited to meet the commander's needs, including reconnaissance, security, peacekeeping operations, and lethal attack - in both land and littoral environments - all without reconfiguration," it said.

Some of the major components of these machines have been made in India.