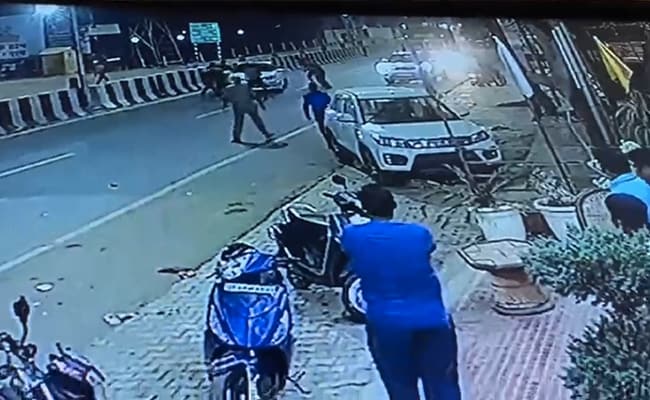 The BJP leader said that the police team also tortured him through the night.

Three policemen were suspended today in connection with an incident of firing at a BJP leader in Uttar Pradesh's Shamli district earlier this week.

Bharatiya Janata Party (BJP) leader Ashwini Panwar had alleged that around 8 pm on Tuesday, some people, possibly policemen, surrounded his car near a filling station in the Kandhla area and started firing at him. While he narrowly escaped, one of his family members, Manish, received bullet injuries on his hand.

Ashwani Pawar, a BJP leader and a native of Ailum kasbah of Shamli district, was driving with some people when his car was fired upon by an SOG team on the Delhi-Saharanpur Road. CCTV footage shows the car slowing down and halting in the middle of the road, followed by police personnel in civilian clothes approaching the vehicle and surrounding it. Moments later, the car is seen speeding away.

SOGs are district-level teams of the UP police formed to handle high-profile crimes.

The BJP leader had also accused the police of torturing him in custody.

Mr Pawar has alleged that the cops later arrived at his residence and, under the orders of the SOG's commanding officer Jitendra Singh, took him away to the police station where he was tortured through the night. They also threatened to slap with fake cases.

"By morning, my supporters arrived in huge numbers and that's how I escaped," Mr Pawar had said. "They (police) took money from my rivals and conspired to kill me."