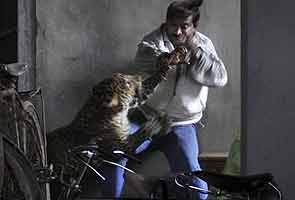 Guwahati: A leopard that wandered into Guhawati went on a rampage, killing one man, swiping off part of another man's scalp and injuring three other people before authorities tranquilized the animal.

Neighbours in the area said the big cat attacked a 50-year-old lawyer as he talked on his cell phone on Sunday evening outside his house. He was rushed to hospital where he died.

Four other people were injured, including a man who had part of his scalp torn off by the animal in a dramatic episode captured by a local newspaper photographer.

Promoted
Listen to the latest songs, only on JioSaavn.com
Guwahati wildlife official Utpal Bora says authorities plan to release the animal at a wildlife park about 120 miles (200 kilometers) west of the city.