Blog: Adventurous Life Of Langurs In The Himalayas

Life of the animals living in the high altitude of the Himalayas is full of adventures and challenges just like the native people settled there. 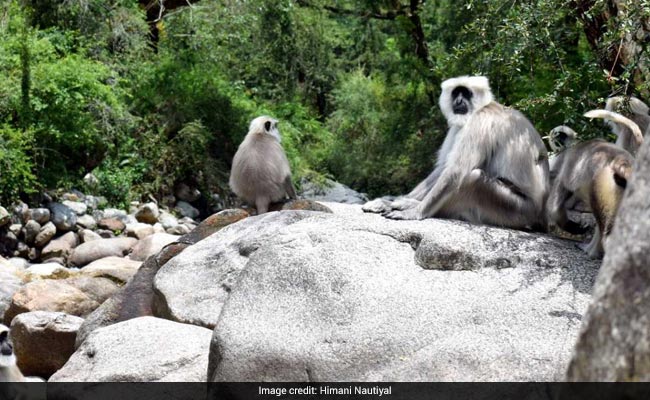 "The Himalayas": When this name comes to our mind we think about magnificent white peaks, adventure and the challenges it brings along. Life of the animals living in the high altitude of the Himalayas is full of adventures and challenges just like the native people settled there. Our closest relatives in the animal kingdom, primates, form big families or "troops" to face these Himalayan challenges. Like in our human families, members of the troop can count on their fellow relatives to help them in case of hardships.

I study the social organization of Central Himalayan Langurs (CHL) in a small mountain village called Mandal, surrounded by the majestic peaks of Himalayas. I follow a primate family made up of 55 members, from which 5 adult males ensure its security and well-being.

Mandal Valley, the home range of this troop, primarily contains oak forests and agricultural fields where some fodder trees are planted at the edges. Two major rivers flow into the valley, coming from the nearby glaciers. The langurs regularly have to cross these rivers in order to reach a good feeding patch. However, crossing the river reveals to be quite a challenge for most of the troop members, especially the young juveniles (2-3 years old). Juveniles are at an intermediate age where they start to become independent from their mothers who cannot carry them anymore for long distances and stopped feeding them with maternal milk. These youngsters have to start caring for themselves without direct support from their mothers.

In this perilous river-crossing story, the adult males, in addition to the mothers, take care of their offspring (in this case, the juveniles especially) and ensure their survival. In these multi-male primate societies, where potentially each male have their own offspring in the troop, they protect the whole troop through mutual cooperation. In fact, in the harsh habitat that are the Himalayas, full of predators and environmental challenges, their cooperation in defending and leading the troop is critical for the survival of all its members.

One day, as my volunteers and I were following the langur troop in the valley, something quite extraordinary happened.

The troop decided to cross this wide, torrential river towards Khalla village, a location they had never been before. We were astonished to see the troop members taking so much risk to feed on leaves of fodder trees planted at the edge of agricultural land. We watched the whole event as it's unfolded from one the side of the river for five hours.

Here is the story of how the males of the troop cooperated to organize and lead members, especially the younger ones, across this perilous river:

First Nati, the alpha male, initiated the movement by crossing the river first, jumping from rock to rock, nearly falling in the deadly waters. The three other adult males followed, and subsequently all the adult females crossed as well. All the while, sub-adults and juveniles were still playing on the other side of the river and did not realize that their mothers were already on the other side. At that moment, sub-adults (4-6 years old), although hesitantly, took all the courage they had left and started crossing the river one by one. Then, only six juveniles (2-3 years old) were left on their own and started crying as loud as they could, calling out for their mothers. They physically could not jump far enough to accomplish what their bigger brothers and sisters were able to. Panicked and feeling abandoned, their cries amplified. 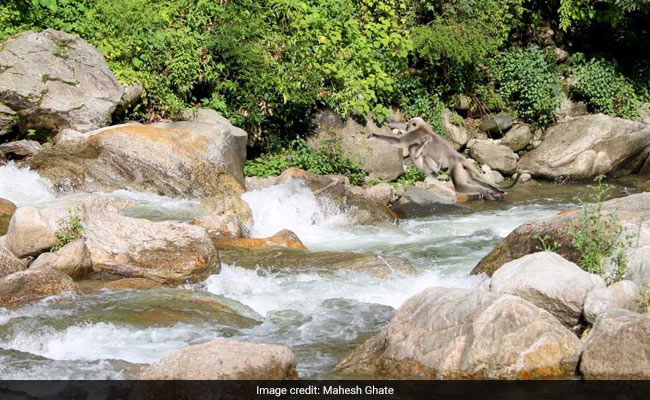 Then, suddenly, we saw this one sub-adult female, Tashi (4 years old), also with the juveniles joining in their cries as she was equally terrified to cross the river.

Right here, I was astonished to see the decision made by Tashi, the sub adult female.

Around 100 meters away from the crossing point, there was one bridge linking the two sides of the valley. Tashi, alone, ran towards that bridge and crossed it as fast as she could, thus avoiding the risky river. Now, it might be surprising that other members had not decided to take a similar route but actually crossing this bridge meant exposing herself to humans and dogs, dangerous predators for a small and defenceless sub-adult like her. 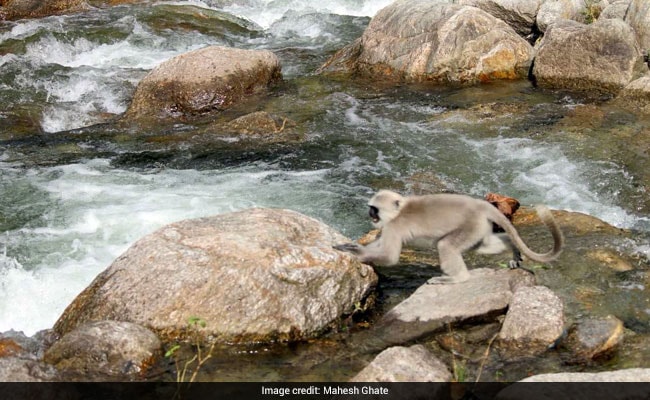 Juvenile crying and trying to cross the river

Also, if the whole troop had taken the bridge, it would have been easy for humans to spot them and harass them. Tashi, after realizing that no one would come and carry her to the other side, had carefully weighed the pros and cons of using the bridge to cross.  She decided that it would be safer for her to cross the bridge alone (less easily spotted by predators and humans) than to attempt crossing the river.

Finally, all members were safe on the other side of the river and spent one and half hour there feeding on young leaves.

Nati, the alpha male, again started moving back towards the original location: the oak patch in the Kunkuli village. This, unfortunately, required again crossing the river. All the members followed the alpha and crossed the river without any difficulty this time. 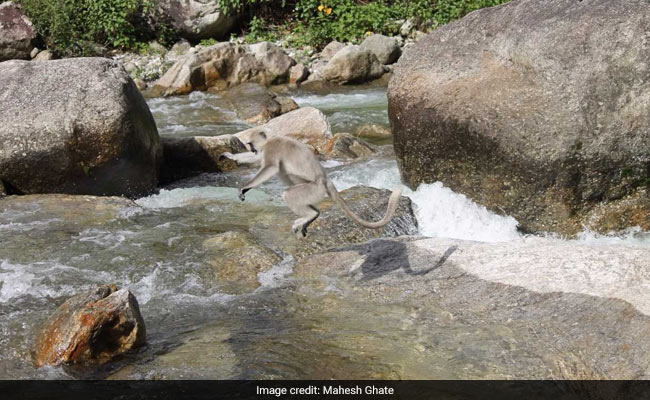 Juvenile’s successful attempt from the other spot suggested by Hari

However, it was 'dejavu' for the six same juveniles who were again stuck on the other side of the river. Fortunately, Hari and Remo, the resident males, took the responsibility to help them.

The other two males Nati and Gichu, whom are new to the troop, stayed on the other side of the river with rest of the troop. Hari and Remo are the two protectors whenever the troop is under threat from potential predators like dogs and leopard, and always work as a team. This help by adult males was more to give a moral support to the juveniles because they can't carry the juveniles like the females. Their mother could have come but this time adult males want to take responsibility to help them to cross the river.  Hari took the lead and started looking for the easiest route amongst the rocks inside the river. Those rocks are well connected and comparatively easy to cross. Few meter away all juveniles were dispersed, panicked and would not stop crying. Few juveniles were already half of the way inside the river panicked and the others were trying a different route on land. Remo took the responsibility to gather the juveniles at one place. Now, all juveniles regrouped at one place and focused on the calls given by the adult males. Hari lead all the six juveniles on the riverside to a narrower point that would be easier to cross. One juvenile tried crossing but remained petrified half way through. He cried continuously, hoping once more that his mother would come back and get him. Then and there, both adult males tried their best to encourage the juveniles to cross by themselves. When Hari realized that the youngsters would not be able to move forward at this location, he again led them to a second spot that seemed even safer. Suddenly, one juvenile finally went further down and crossed! Other juveniles saw him and gained some confidence.

With all these twist and turns, the whole langur family successfully crossed the river two times in a single day without any casualties. It was really an adventurous day for juveniles which will help them to be bolder and confident next time when they face a similar situation. 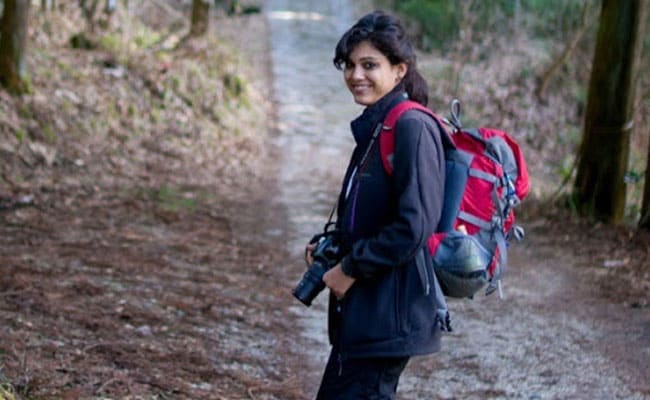 (Himani Nautiyal is a National Geographic fellow and pursuing her PhD from Primate Research Institute, Kyoto University, Japan. She can be reached at himani.nautiyal08@gmail.com)

Odisha JEE To Be Held In May First Week