The Lav-Kush Ramlila committee is known to invite politicians to participate in the plays that continue for days during the Dussehra celebrations. 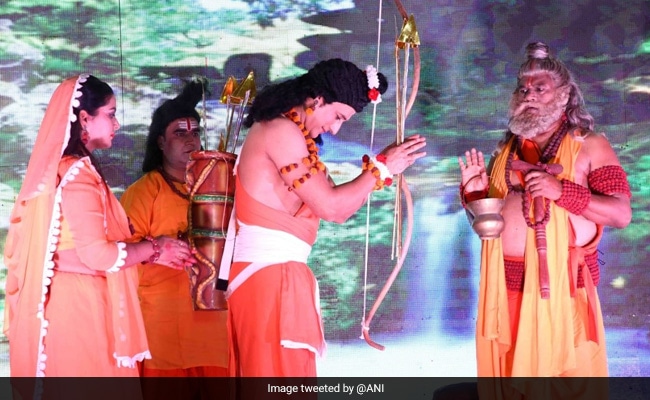 The Ramlilas in the national capital have gained prominence ahead of the polls early next year.

BJP leaders in the national capital are making optimum use of the platform offered by Ramlilas to reach out to the public this Dussehra, playing prominent Ramayana characters such as monkey warrior Angad and rain god Indra.

The Ramlilas in the national capital have gained prominence ahead of the polls early next year.

Mr Tiwari, an actor-turned-politician, has already portrayed the character of Parashurama, the guru of Bhishma, Karna and Dronacharya.
He will now play Angad, the monkey warrior, at the Lav-Kush Ramlila, his aide said.

The Lav-Kush Ramlila committee is known to invite politicians to participate in the plays that continue for days during the Dussehra celebrations.

Mr Kulaste has played the sage Agastya at the same Ramlila, said one of the organisers.

Former Union minister Suresh Prabhu will bring alive the character of Nishad Raj, who is said to have helped Lord Rama cross the river Ganga during his exile.

Gorakhpur MP Ravi Kishan will play Angad at a Ramlila in Derawal Nagar.

While playing Parashurama, Mr Tiwari mentioned Indian Army's surgical strikes across the Line of Control and the National Register of Citizens (NRC).

The BJP had made the surgical strikes a key element of its campaign during Lok Sabha polls earlier this year. Its Delhi unit leaders have been stressing that the NRC exercise should be implemented in Delhi.

Incidentally, the major Ramlilas are organised in Old Delhi, Mr Vardhan's constituency. Thousands flock to see Ramlilas in the capital that attract both politicians and prominent actors.

Vice president Venkaiah Naidu was to be the special guest at the Ramlila on September 30 but as he was not in town it was cancelled, Mr Kumar added.

In 2017, then Union Minister of State for Social Justice and Empowerment Vijay Sampla, portrayed Nishad Raj at Lav Kush Ramlila.

Mr Tiwari had played the role of Angad while Vijender Gupta's wife Shobha played Ahilya. Representatives from Nav Shri Dharmik Lila Committee (NSLDC) said theirs is a Ramlila which sees ''Congress and BJP leaders coming together''.

"Every day, we have Union ministers coming to our Ramlila. We have also invited Chief Minister Arvind Kejriwal and his deputy Manish Sisodia," said Rahul Sharma, press secretary of NSDLC.

He said every year, Sonia Gandhi, Manmohan Singh and Rahul Gandhi attend their Ramlila on Dussehra and this year too they have been invited.

Shri Dharmik Lila Committee, which is one of the oldest Ramlila committees, might also see political bigwigs, and representatives said they have invited senior political leaders but their confirmation is awaited.