Joe Biden Could Be Unbeatable After Today's Primaries

If the results in the US presidential primaries tomorrow morning confirm what opinion polls are saying, the Democratic race may well be over, with former Vice President Joe Biden heading to being anointed the party's candidate to try and topple President Donald Trump. Polls in Michigan, the mid-west state that was amongst one of the three democratic states to flip to Red in 2016 and give Trump the presidency, has Biden leading his left-wing rival Bernie Sanders by 15 points (Monmouth University).

For Bernie Sanders Michigan was a must win state. He, besides winning his home state Vermont, had victories only in the west, California, Colorado and Utah and lost 11 primaries to Biden across the rest of the country on Super Tuesday last week. Michigan is important mainly because he pipped Hillary Clinton by a percentage point here in 2016, keeping his campaign alive. And while there are more primaries on Tuesday in the US, most of the states going are in the South where Biden, after his out of the box win in Texas last week, is running with numbers above 65 per cent in the opinion polls.

Besides being an old Democratic bastion, Michigan is part of the industrial rust belt of America, with a large unionised auto industry, and many blue collar workers. These are the people Bernie Sanders has appealed to in the past and also who left the Democrats to vote for Trump in 2016. If Bernie Sanders cannot get them to support him here, he will face an extremely uphill task in the upcoming primaries on the following Tuesday when two more mid-west industrial states, Illinois and Ohio join Florida and Arizona in determining the Democratic candidate.

But all is not lost for Bernie Sanders; he seems to have solid support from men presumably blue collar (49 to 39 per cent support Sanders)  and it is only the lack of women's support ( 53 to 33 per cent in favour of Biden) that leaves Bernie floundering at 36 per cent support. 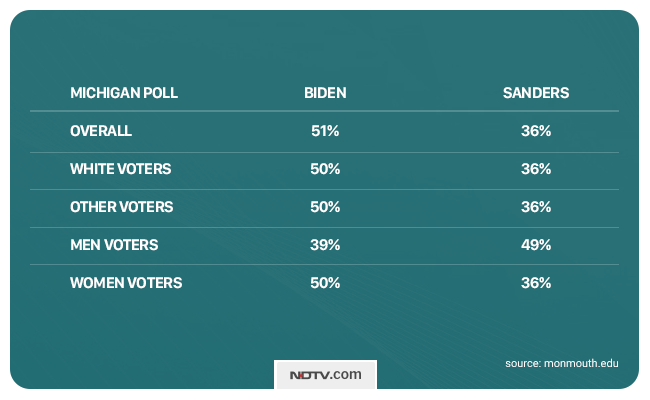 The other hope for Bernie Sanders was repeating his massacre of Hillary Clinton (72 per cent to 27 per cent) in the IT hub of the state of Washington. Here the overwhelming support of the young voters and "liberals" who bought into Bernie's magic was crucial in keeping the campaign flowing. Unfortunately, the polls which had Bernie Sanders well ahead a couple of weeks ago seem to have turned and the fight here is much closer with Monmouth University even giving Joe Biden a small lead.

The fact is that since Biden's big win in South Carolina and with rivals (Amy Klobuchar, Pete Buttigieg and Mike Bloomberg ) dropping out and announcing support for Biden, the Democratic Party and its supporters seem to be coalescing around the much for centrist and moderate Biden. The New York Times says it is not only Democrats that come out in support but "Never Trump" Republicans also joined the bandwagon.

These voters can create winning margins for Democrats in swing states like Michigan, Pennsylvania, Arizona and North Carolina in the general election.

Their numerical strength was on full display on Super Tuesday in the Virginia and Texas suburbs, which saw 74 per cent and 87 per cent higher voter turnout, respectively, than four years ago, reports New York Times.

With 357 delegates up for grabs in a proportional distribution today Biden should increase his lead to more than to over 250. And that will be a very difficult lead for Sanders to claw back.

5 Days Of Blood, Bodies And My First Visit To A Mortuary In Delhi