The Tale Of Paradise And Its Protectors

Over the years I have grown up with pictures of Kashmir in my house. My parents visited Kashmir in 1989, soon after their wedding, and they posed for the traditional photo on a Shikara, the famous wooden boats of Dal Lake in Srinagar. I have often heard them raving about the beauty of Kashmir.

But when I left the airport and headed towards the NDTV office in Srinagar, I struggled to make sense of things. The Kashmir that I was witnessing was vastly different from the one my parents had seen. I have heard and read a lot about the tense situation in Kashmir, but the actual sight of a CRPF (Central Reserve Police Force) soldier every 200 metres was still jarring. I did not know whether to appreciate the beauty around me or despair about the ground reality.

The office had sent me for a shoot with the CRPF, to capture snapshots of their life in the troubled region. It was going to be my first close interaction with the forces and I was going a month after the Pulwama terror attack in which 40 soldiers of the CRPF lost their lives. 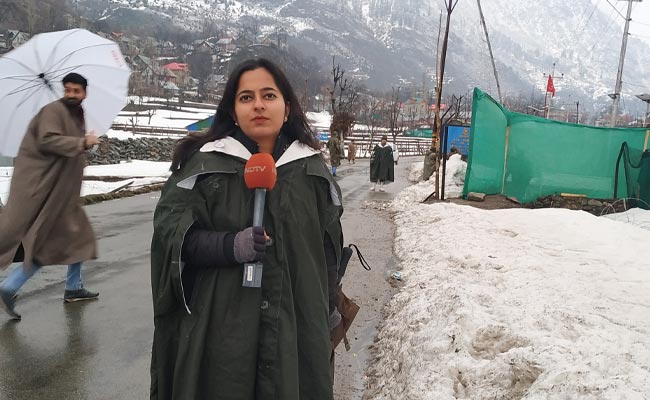 They also gave me a snow and rain protection overcoat large enough to fit in two of me. (My friends said in the photos, I looked like a student of Hogwarts, Harry Potter's wizarding school)

My cameraperson Amir Bhat and I travelled to Gund, 70 km from Srinagar, where the 118 battalion of the CRPF is posted.

It wasn't snowing at all in Srinagar, but in Gund, which is at a higher altitude, everything was blanketed in white and the temperature was -10 degrees Celsius. I was expecting it to be cold, but not toe-numbingly freezing.

It was snowing and raining when we reached in the evening.

The CRPF gave us a warm welcome and helped us organise our shoot by sharing their roster. As we were heading out to cover the "area domination exercise", the soldiers looked at my usual Delhi winter-style boots and commented, "Madamji! Ye pehan kar kaise chaloge 3.5 feet deep snow mein?" (How will you walk on snow 3.5 feet deep in these shoes?)"

They decided to loan me the snow boots that they all wear. Just one problem - a battalion of over 250 men didn't have my shoe size, 5.

For the next two days, I clomped around in oversized snow boots.

They also gave me a snow and rain protection overcoat large enough to fit in two of me. (My friends said in the photos, I looked like a student of Hogwarts, Harry Potter's wizarding school).

It was when I walked with the soldiers for over a kilometre that I understood why they were so insistent on the right gear. My feet sank into the snow. 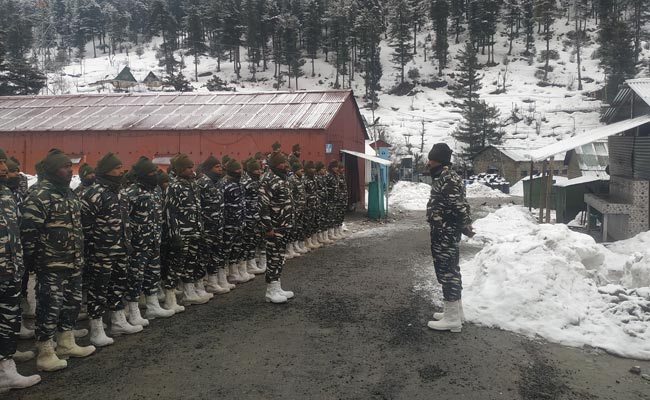 The Kashmir that I was witnessing was vastly different from the one my parents had seen. I have heard and read a lot about the tense situation in Kashmir, but the actual sight of a CRPF (Central Reserve Police Force) soldier every 200 metres was still jarring

As I struggled to walk, trying to follow the footsteps in the snow, I couldn't stop marveling at how these soldiers did this multiple times a day and for longer distances.

I even saw a basketball match in their camp. It was interesting to note that one of their biggest handicaps in sport is telling their rivals apart. Every man is in the exact same uniform 24*7, so one team plays with caps and the other, with headbands.

At their evening aarti (prayer) a soldier I saw in full uniform, patrolling with an AK-47, was now wearing a priest's saffron dhoti-kurta over his clothes.

It was the same with the Granthi (or the one who reads the Sikh holy scripture Guru Granth Sahib) in the Gurudwara room. For the soldiers, this camp was their whole world. Miles away from home, they only had each other.

Over the next two days I saw them waking at 6 am and going through physical exercises, weapons training sessions and medical check-ups (heart attacks are a constant threat in the high altitude). I discovered their stories of pain and loss. They shared how telling their families about the harsh conditions was not an option. In a soldier's words - "Hum jaisi bhi haalat me ho, hamara pariwaar chain ki neend soye bas yahi chahte hain" (No matter what we suffer, we just want our families to sleep in peace).

On the third day, when I was leaving , they invited me to the Amarnath Yatra (a hugely popular pilgrimage to the Amarnath shrine in Kashmir) and said that every year they guarded the thousands of pilgrims all along the way. I thanked them for the invite, not telling them that I was really not much of a believer in the divine.

I did tell them that I was going back with a little more faith in the human spirit and memories that I will cherish for a lifetime.