Blog: In Uttar Pradesh, BJP Gets A Black Eye

Should the BJP begin to panic now on account of the panchayat election results in Uttar Pradesh? Has the Covid bug finally bitten the voters in India's most-populous state, a state that accounts for 80 Lok Sabha seats and will vote for its next government 10 months from now? Or are opposition parties and their supporters clutching at straws? The seeming defeat of the BJP in these elections has been described by some in the party as a problem of many rebels in the fray who will return to the mothership. For those who are headlining this result, is too much being made of basically rural elections where many local issues, personalities and unorthodox techniques of 'vote-getting' determine the winner?

Candidates in these zila panchayat elections don't officially get a party symbol on the ballot paper, but parties do indicate who their candidate is, support her campaign and push for her win. But, as the results below show, it is Independents and others that have come away as the big winners with 40% of the seats. That said, the table below shows the BJP trailing the Samajwadi Party (SP) quite significantly across the state by over 200 seats. If we add all the opposition parties together, that would take them to close to 50% of all the seats contested. That is a lot in a state where the BJP swept the last assembly election in 2017 with 40% of the vote and 321 of a possible 403 seats. 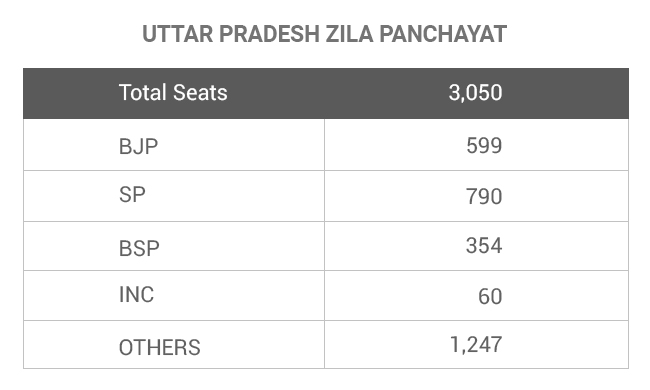 The BJP is probably right: that with its money power, political patronage and allure to rebel candidates, it may be able to muster majorities in many zila parishads. But it is highly embarrassing and significant that in key districts which are the constituencies of the Prime Minister and the Chief Minister, the party has done poorly and independents may not be able to help them take power. In fact, Varanasi is the only pit stop the PM made during his West Bengal campaign to check how covid was being handled. The answer from voters seems to be "not very well". The BJP only got 7 out of 40 seats. In Gorakhpur, Adityanath's home constituency, no party is ahead, but to be neck and neck with SPdoesnt say much for home turf. 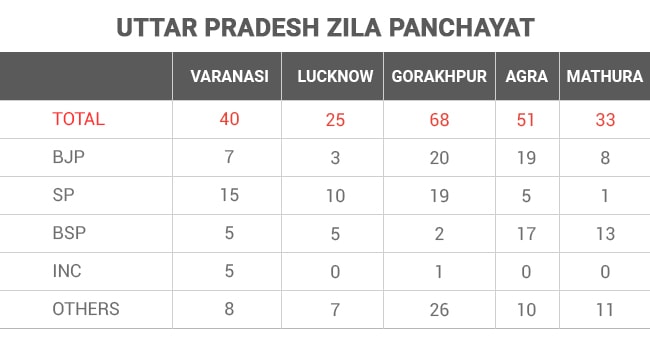 More importantly, in the 2017 election, the BJP swept the rural areas of Agra, Kanpur, Allahabad, Lucknow and Meerut - so the setback in the same rural areas is a problem. They could take heart in the fact that they lost Varanasi Zila in 2016 as well. But at that time, the SP, as the then ruling party, was accused of using the official machinery to win the Zila elections. It is unlikely that the BJP did not use its own and the state's machinery this time, which makes the results even worse.

So is it Covid that has pushed people to vote against the BJP? Just like in Bengal, it is difficult to correlate, but even there, the votes cast for Mamata Banerjee's Trinamool saw a big upswing in the last two phases as Covid cases grew. The Left-Congress votes seem to have en masse moved to the Trinamool, but it is difficult to conclude that it was just Covid that pushed the voters to punish the BJP for the centre's Covid management and support Mamata.

And yet, for the BJP to be blasé and say that in these local elections, it's rebels who have defeated their candidates and that they will reconcile with the party would be ignoring the reality on the ground. Reported cases running at 30,000+ for more than a week, and a collapsing infrastructure, is not helping their cause. The BJP will need to work on rebuilding people's confidence in their ability to deliver.

That said, let's not forget that the Modi and the BJP have the ability to do it. They did it after demonetization, sweeping Uttar Pradesh in 2017 even though everyone was predicting a fallout. At that time, they sold it as an attack on the rich. In 2019, they leveraged the Balakot surgical strike. The agenda and selling points of Hindutva, direct transfers, and a well-oiled machine isn't going to give up that quickly. UP isn't Bengal, it is the heart of their majority, and they will push very hard to keep it that way. And the divided opposition does them a giant favour.

Blog: What It Took To Cremate My Father In Delhi