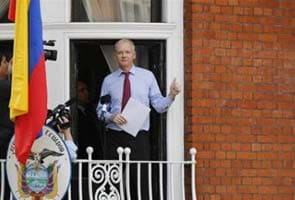 Washington: WikiLeaks founder Julian Assange has said that he fears the whistleblower who exposed a vast US surveillance programme could face the same fate as the US soldier who leaked files to his website.

In an interview from the Ecuadoran embassy in London, where he has been holed up for nearly a year, Mr Assange defended the public's right to know about the Internet data mining programme revealed late yesterday.

But he fears the individual who leaked details of the programme could face the same fate as WikiLeaks source Bradley Manning, who faces possible life imprisonment for "aiding the enemy" in a military trial begun this week.

"Let's ask ourselves whether the whistleblower who has revealed those - and there's more to come -- is going, in three years' time, to be in exactly the same position that Bradley Manning is in today," Mr Assange said.

The US government has defended the monitoring programme - in which it directly accessed the servers of Internet giants like Microsoft, Apple and Facebook - as essential to preventing terrorist attacks on US soil.

It has said the program was approved by Congress and conducted with secret court orders, and that the leaked revelations put American security at risk.

But Assange said the public had the right to know about the programme.

"There's open justice where judges, in their decisions of trying people, themselves are tried before the public," Assange said.

"It doesn't mean that every aspect, every detail must be public, but at least enough parameters to understand what is really going on."

The revelations about the Internet spying program, first reported by the Washington Post and Britain's Guardian newspaper, came one day after a Guardian report about the widespread mining of phone records by the same US spy agency.

The Post said the leak came from a career US intelligence officer "with first-hand experience of these systems and horror at their capabilities."

"They quite literally can watch your ideas form as you type," the officer was quoted as saying.

Promoted
Listen to the latest songs, only on JioSaavn.com
WikiLeaks rose to fame after Manning, a US Army intelligence analyst based in Iraq, leaked to the anti-secrecy group hundreds of thousands of classified war logs from Iraq and Afghanistan and secret cables from US embassies.