Why big airports are difficult to secure 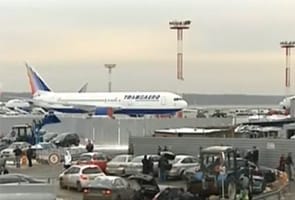 New York: How do you fully secure something as big and sprawling as an international airport against a terrorist bombing like the one on Monday at Domodedovo Airport in Moscow?

You cannot, security experts I spoke with on Monday say. Airports are by definition public places requiring relatively free access.

The experts have long contended that serious holes in security at airports have been neglected while most of the effort and money goes into looking for weapons on passengers at checkpoints.

But they have also warned that a sensational incident in one place can lead to widespread overreaction and demands for quick fixes.

"It always does," said Bruce Schneier, a security technology consultant and author who has long argued that there is no such thing as perfect security, and that pretending otherwise is foolish.

"At some point, it needs to be made clear that nothing is 100 percent secure," he said. "With airports, if you were to build a new terminal from scratch, sure, you could do a better job of anticipating certain security issues.

"But still, we're talking about public areas," he said. "It doesn't matter if it's an airline terminal, a train station or the front of Macy's -- as long as you have free access, you're going to have these potential issues."

One measure already in place that could address threats like the terrorist attack in the Moscow terminal is what the Transportation Security Administration in the United States refers to as a behavioural detection officer program. In the program, plainclothes officers trained in what the agency calls "nonintrusive behaviour observation and analysis" mingle with crowds, looking for signs of potential trouble in physical behaviour.

The TSA has more than 3,000 behavioural detection officers at 161 of the 450 or so commercial airports in the United States. Usually, they work near checkpoints, but they are also elsewhere in airport terminals.

A spokesman for the agency, Greg Soule, said passengers may notice "unpredictable security measures in all areas of US airports, including before the checkpoint." He said the TSA was monitoring reports from Moscow and sharing information with international agencies.

After the Moscow attack, travelers in the United States will quickly see an increase in random security checks "above and beyond the baseline measures currently in place," he said, including checks in public areas like baggage claim and ticketing.

Airport terminals operate in two zones, the already secure areas and the public areas. As many news reports since the 2001 terrorist attacks have shown, there are problems even in the secure areas, with poorly supervised access points, as well as inadequate credentialing and monitoring of some airport employees and delivery people.

In the public areas, experts say, behavioural detection can be useful as part of a protection program that also includes sophisticated intelligence gathering.

For most airports, adding physical security to public spaces is as much an engineering issue as a procedural one, as Mr. Laird pointed out. In places like India, where air travel is growing rapidly and many airports are being built or expanded, new designs allow for stricter access to terminals. Often, people without tickets or reservations are diverted from main terminals.

But Joe Brancatelli, the publisher of JoeSentMe.com, a site for business travelers, said, "They've merely pushed back the perimeters." People still have to come to the airport, he said.

While technology for detecting explosives is being improved, the main defense is vigilance, despite its limitations. Behavioural detection is a part of the highly regarded Israeli aviation security system, for example, though the Israeli process is time-consuming and perhaps more invasive than would be acceptable in the United States, where more than 1.5 million people a day pass through the TSA checkpoints.

Behavioural profiling is "a good idea, assuming it's done right," said Mr. Schneier, who nevertheless has serious reservations about how it is being done here. "You can go around looking for people who look suspicious, which works great if you actually know what suspicious looks like, rather than just deciding, this guy dresses funny and his food doesn't smell right."

Mr. Laird, who retired from the Secret Service in 1989 to become the global head of security at Northwest Airlines, agreed that a cadre of trained behavioural detection officers can add a layer of security in a place like an airline terminal. But he said the quality of training needed to be emphasized as well as the great difficulty of securing any big public place against terrorists, who can simply choose another site.

"Nothing in public is ever going to be anything near 100 percent secure in a free society," he said. On the other hand, he said, "good, well-trained cops are a little like good lifeguards. You need to have the ability, but what you look for is: what stands out here?"