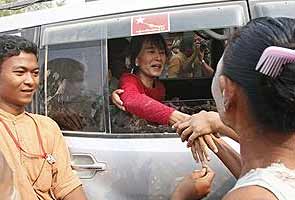 European Union countries have agreed in principle to suspend all measures, with the exception of an arms embargo, for one year, with a formal announcement expected next week, EU diplomats said on Thursday.

Critics say the sanctions -imposed in response to the country's human rights abuses -have hindered development in what is one of the world's poorest nations, while advocates say they have helped to spur democratic reform.

Here are some facts about the measures.

Imposed since 1996, the European Union sanctions were designed to hurt the former junta and its allies.

The measures have been reinforced several times, including in 2007 after a brutal military crackdown against the monk-led "Saffron Revolution" pro-democracy protests, and in response to Suu Kyi's detention. They are all due to expire on April 30.

The main EU sanctions are:

- An asset freeze on nearly 500 individuals.

- A travel ban that was lifted for 87 Myanmar officials, including President Thein Sein, in February but remains in place for several hundred individuals linked to the military, government and former junta.

- A bar on EU companies and organisations from investing in Myanmar or taking part in government enterprises.

- An import ban including timber, metals and precious and semi-precious stones. A ban on doing business with almost 900 iron and steel, timber and gem enterprises.

- Limitation of diplomatic relations, although the EU in January announced it would open an office in Myanmar's main city Yangon to manage aid programmes and play a "political role".

- Limits on development assistance. These have been loosened and in February the EU announced plans to increase aid by 150 million euros ($195 million) in 2012 to 2013, with a focus on health, education, agriculture and institutional capacity-building. The sum is nearly equivalent to the total allocated since 1996.

Washington has a web of tough sanctions against Myanmar, most of which would require approval in Congress to be eased.

Five laws and four presidential documents govern the direct measures against Myanmar, while additional targeted sanctions relate to issues such as the use of child soldiers and drug trafficking in the country.

Following April by-elections, Washington said it would ease restrictions on investment to Myanmar -- including allowing US credit cards to be accepted there and promoting investment and financial services in areas seen supporting reforms.

On Tuesday the US Treasury Department said it would no longer bar financial transactions for certain non-profit activities in Myanmar if the money is going toward projects that "meet basic human needs" or promote democracy.

The United States also plans to appoint an ambassador and boost its $35 million in annual aid, but the bulk of the sanctions remain in place.

The main US sanctions are:

- Prohibition on providing financial services and any financial transactions to individuals subject to visa bans and the former junta.

- Freezes on certain individuals' assets held by US entities.

- A general ban on the import of Myanmar goods, with specific prohibitions relating to gems.

Promoted
Listen to the latest songs, only on JioSaavn.com
- A ban on new investments in the country, including through a third country.