Record cold is expected in swaths of the country this week. Here's what travelers should know ahead of the snow. 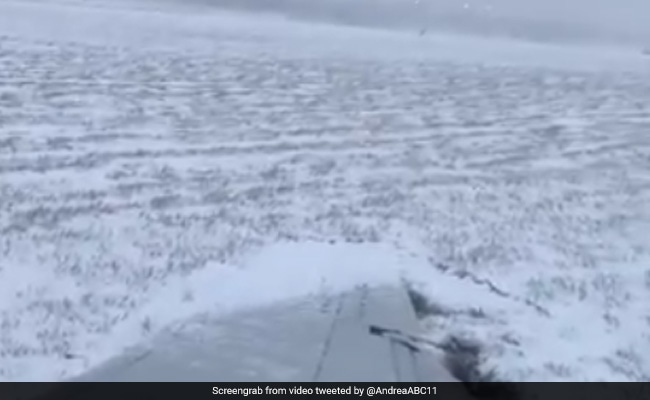 A plane slid off a runway as it was landing at Chicago's O'Hare Airport.

The sky was gray and the ground was white and the passengers knew they were in for something after American Eagle Flight 4125 landed at Chicago O'Hare International Airport on Monday.

"Ooooooh," one said, in a video tweeted by a TV journalist who said it came from a Greensboro, North Carolina, man. The flight left Piedmont Triad International Airport in Greensboro at 6:27 a.m. and landed two hours and 16 minutes later in Chicago. "We're sliding, we're sliding, we're sliding," another one said. There were repeat uses of the word "no," a "hey," several groans and some words that cannot be repeated.

BREAKING: @AmericanAir Flight AA4125 from @flyfrompti to @fly2ohare slides off runway in Chicago this morning. Passengers tell me everyone is OK, deplaned and on buses to terminal. Video: Joseph Lian from Greensboro. @ABC11_WTVD@ABC#ABC11pic.twitter.com/rBwyqfVtiU

Then, finally, as a wing came to rest in the snow: "I think we landed!"

The Embraer ERJ145 with 38 passengers and three crew members aboard, operated by regional carrier Envoy Air, "slid off the runway due to icy conditions," according to American Airlines. No one was hurt, but it was the most dramatic example of a weather-related travel disruption Monday, as cold-weather records were expected to shatter across the eastern part of the country.

As of late Monday afternoon, more than 1,500 flights within, into or out of the United States had been canceled, according to the flight-tracking site FlightAware.

The majority of those - more than 1,200 - were at Chicago-area airports. On Monday, United and American said passengers with travel plans at Chicago O'Hare could change to alternate flights through Thursday without paying a change fee. Southwest Airlines warned of possible disruption in several cities: Buffalo; Chicago; Cleveland; Detroit; Grand Rapids, Michigan; Milwaukee; Rochester, New York; and St. Louis. Anyone planning to travel Monday through any of those cities is allowed to change their flight within 14 days without an extra charge, Southwest said.

Another 4,702 flights in, out of or within the United States were delayed by early Monday afternoon, FlightAware said. On its website, Delta warned that delays were possible in the Great Lakes region and Central United States on Monday.

Airports were messy, but icy roads presented their own threat as the front moved through the country. Mark Elliot, a meteorologist at the Weather Channel, said portions of the South were already getting freezing rain, and more areas could be "a problem zone" Tuesday morning.

"It doesn't take much of that ice to really snarl up traffic," he says.

He singled out Huntsville, Alabama, which was forecast to drop from the 60s during the day on Monday to the 20s overnight, with rain in the forecast.

"Anything that is wet will no longer be wet," Elliot says. "It'll be that clear coat of ice."

According to the National Weather Service, much of the central and eastern United States is getting "the coldest surge of Arctic air so far this season," bringing record low temperatures from the Plains to the East Coast and Deep South into Wednesday.

"This will make it feel like in the middle of winter rather than in November for much of the eastern two-thirds of the country for the next few days," a Monday forecast said.

The National Weather Service said snow fell Monday morning from the northern Rockies through the northern Plains and upper Midwest. The forecast warned that snow was likely to pick up over Upstate New York and northern New England on Monday night, with six to 12 inches possible for northern New York and northern Vermont by Wednesday morning. Lake-effect snow is likely downwind of the Great Lakes, according to the forecast.

Given those predictions, anyone flying this week should keep an eye out for additional waivers if they want to change plans, check their flights before heading to the airport, prepare for delays and cancellations and plan to drive slowly and carefully. And, if the Old Farmer's Almanac forecast that "this could feel like the never-ending winter" in some parts of the country holds true, travelers should buckle up for plenty of miserable repeats.

(Except for the headline, this story has not been edited by NDTV staff and is published from a syndicated feed.)
Comments
American Eagle FlightChicago O'Hare International Airport