Washington On Edge For Rober Mueller's Findings On Trump-Russia Probe

The secret report, the result of a 22-month investigation by Robert Mueller into possible collusion between the Trump campaign and Russia and obstruction of justice, was handed to Us Attorney General on Friday. 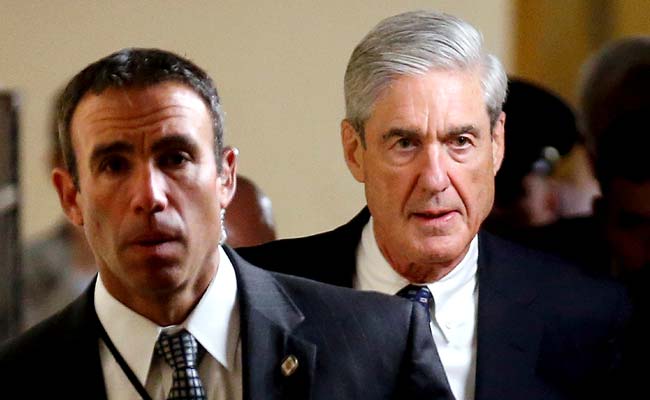 US Attorney General Bill Barr was expected to hand Congress as early as Saturday the key findings of the Russian meddling probe with Washington anxious to learn if President Donald Trump is implicated in serious wrongdoing.

Chronic tweeter Trump, who headed out from his Florida residence early for a round of golf, remained uncommonly silent after spending two years repeatedly labeling Special Counsel Robert Mueller's investigation an illegal witch hunt -- suggesting the White House has still not seen the report.

Meanwhile Democrats in Congress, many of who are hoping for evidence to support a presidential impeachment, were preparing to meet as they pressed hard to ensure the report's full contents are made public, and not just a summary prepared by the Trump-appointed Barr.

"It is imperative for Mr Barr to make the full report public and provide its underlying documentation and findings to Congress," House Speaker Nancy Pelosi and Senate Minority Leader Chuck Schumer said late Friday in a statement, adding that Barr should not give Trump any "sneak preview."

Barr was reportedly in his Justice Department office early Saturday to review Mueller's conclusions and decide what to do next. 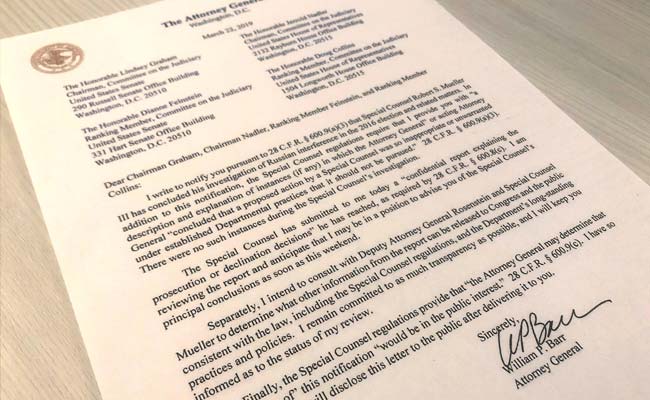 U.S. Attorney General William Barr's letter to US lawmakers stating that the investigation by Special Counsel Robert Mueller has been concluded.

The secret report, the result of a 22-month investigation by Mueller into possible collusion between the Trump campaign and Russia and obstruction of justice, was handed to Barr Friday with the announcement that no new indictments were forthcoming.

That produced sighs of relief from the White House, where members of Trump's family -- Don Jr. and son-in-law Jared Kushner in particular -- had been feared possible targets of the probe.

With Mueller prevented by longstanding Justice Department policy from indicting the president himself, there were no hints on whether the report damns or clears Trump of criminal behavior.

In a brief letter to Congress late Friday, Barr announced that the long-awaited report had been submitted to him and that he would send its "principal conclusions" for Congress as early as this weekend.

Mueller, a 74-year-old veteran criminal prosecutor and former FBI chief, was required to produce a confidential report that explained why he decided to indict or not indict subjects of the probe.

Barr decides himself how much of the report he releases to Congress and the public, though he said in his letter Friday that he is "committed to as much transparency as possible."

The special counsel regulations "give Barr lots of discretion about what to disclose to Congress and the public," said Andrew Coan, a University of Arizona law professor.

"The selective release of exculpatory material is a possibility worth watching for."

Mueller investigated whether members of Trump's 2016 election campaign colluded with Russians to skew the election.

In addition, he studied whether actions by Trump, including the May 2017 firing of FBI director James Comey, amounted to criminal obstruction of justice.

But what he has concluded remained a mystery Saturday.

"We don't, at this stage, know anything about what information the Mueller Report contains. We don't know what form the document takes. We don't even know how many pages comprise it," Benjamin Wittes, a prominent Washington legal analyst, wrote on the Lawfare website.

"The president should wait before popping the champagne corks over this and tweeting in triumph."

Five of the six have pleaded guilty to the charges against them.

Court filings in those cases painted a broad picture of a cohesive Russian effort via hacking and social media manipulation to swing the election in Trump's favor against Democrat Hillary Clinton.

The investigation has revealed scores of contacts between the campaign and Russians, with members of the team readily talking to the Russians about obtaining dirt on Clinton.

Hours before Barr's announcement, Trump repeated his accusation that the entire investigation was a hoax and questioned Mueller's credentials for investigating him.

But Mueller, who was director of the FBI for 12 years, has the respect and support of Democrats and Republicans alike as a straight-shooting, disciplined and fair investigator.

(Except for the headline, this story has not been edited by NDTV staff and is published from a syndicated feed.)
Comments
Robert MuellerWashington