The soldiers' remains were transported early Friday from the North Korean port city of Wonsan to the Osan US Air Base in South Korea. 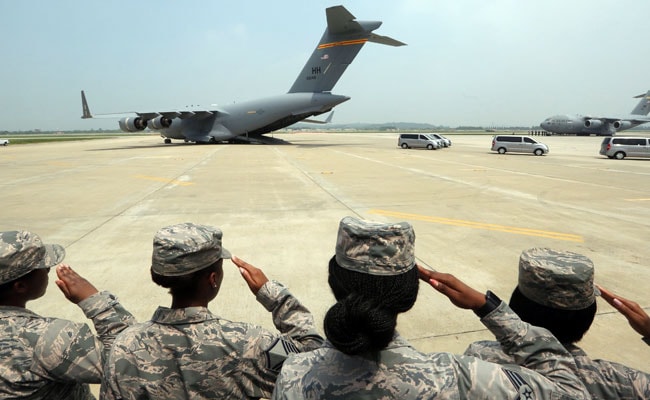 Some of the remains of more than 50 service members headed back to the United States from North Korea may also belong to French and Australian soldiers who fought alongside US troops in the Korean War, Defense Secretary Jim Mattis said Friday.

The soldiers' remains were transported early Friday from the North Korean port city of Wonsan to the Osan US Air Base in South Korea, in line with an agreement struck between President Donald Trump and Kim Jong Un last month.

"You noticed that there was a UN blue flag on each of the boxes," Mattis told reporters at the Pentagon. "We don't know who's in those boxes."

"As we discover it, they'll be returned, and they could go to Australia. They have missing. France has missing. Americans have missing."

"So this is an international effort to bring closure for those families," Mattis added.

A formal repatriation ceremony for US soldiers is to be held in Hawaii on August 1 attended by Vice President Mike Pence.

North Korea has previously been accused -- most notably by Japan -- of faking the remains of foreign citizens and using them as a bargaining chip.

"The reason why those remains aren't on the way back, for example, to the United States right now is that they are first going to be reviewed," Mattis said, when asked if the United States was confident the remains were indeed those of its service members.

"Initially they are in Korea, and we'll look for any anomalies, whether they are not what we think they might be," he said.

"And then the forensics will begin when we land them in Hawaii, where the laboratory is. And then I can give you a better answer.

"But no, we have no indication that there is anything amiss."

The Pentagon says detailed analysis of the remains could take several months.

Between 1990 and 2005, 229 sets of remains were previously repatriated, with US troops operating on North Korean soil to locate their countrymen, but those operations were suspended when ties deteriorated over Pyongyang's nuclear program.

When asked whether Friday's transfer could pave the way for US teams to return to North Korea, Mattis replied: "That is certainly under consideration."