US Woman Wanted Free Dirt. Her Yard Was Buried By Over 100 Truckloads

The dirt covers 11,000 square feet, large enough for the footprint of a mansion and way more than Rosmery Vega said she wanted. 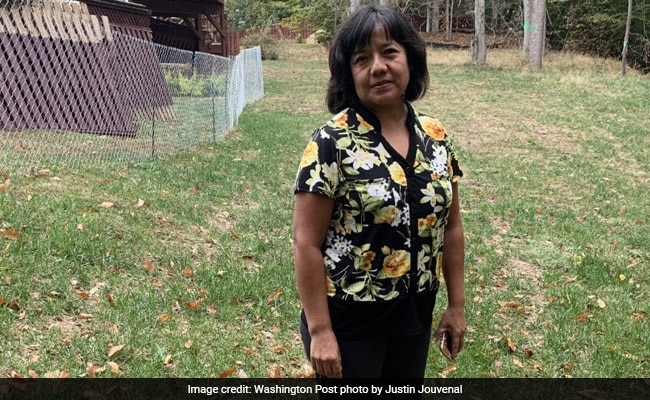 When Rosmery Vega's brother sent her Facebook ads exclaiming "Free dirt and Yard Leveling!" she thought she had found the perfect solution to shore up the sagging fence in the backyard of her Springfield, Virginia, home.

That is, until the dump trucks startled rumbling up to her house.

While Vega was away on a meditation retreat, she claims the dirt broker showed up unannounced and began dumping, according to an account she provided in a lawsuit against the contractor - one he vigorously disputes. One load turned to 10. Ten became 20. Twenty grew to 50. In all, an engineer she hired estimates more than 100 loads buried her backyard over the course of a day.

The dirt covers 11,000 square feet, large enough for the footprint of a mansion and way more than Vega said she wanted. Feet of fill have damaged or killed 13 trees, spilled into her neighbor's lot, and poured into a protected area for one of Fairfax County's largest streams, she said. She claims the rest of the unstable mass threatens to slide into the sensitive watershed, too.

Vega, who runs a housecleaning business and is a single mother, worries she could be forced out of her home by the cost to fix the mess. "It's just been very overwhelming," she said, wiping tears from her eyes on a recent afternoon.

Ivo Pereira, the owner of E Trucking & Services, has asked a judge to dismiss most of the claims in the lawsuit and said Vega's portrayal of the situation is highly inaccurate. Pereira and his attorney said in an interview that Vega kept increasing the amount of dirt she wanted and failed to get the necessary permits to carry out the work. They say E Trucking did not show up unannounced and provided thousands of dollars' worth of free services from hauling to grading.

"She was perfectly fine with getting that dirt until the county started saying, 'What approval do you have and what planning do you have?' " said Stephen Stine, Pereira's attorney. "And then she tried to turn around and blame our client."

The lawsuit filed in Fairfax County Circuit Court is one of a number of complaints, civil actions and criminal cases locally and across the country that have accused dirt brokers of being, well, dirty. Some unscrupulous operators in the obscure and lightly regulated industry have been found to cut corners to make a quick buck by helping developers dispose of fill excavated during construction projects.

Last year, 30 people were indicted on Long Island and accused of passing off dirt from construction sites contaminated with lead, arsenic and other hazardous pollutants as "clean fill" to homeowners, schools and businesses. The elaborate investigation dubbed "Operation Pay Dirt" involved wiretaps and electronic eavesdropping.

In 2017, New Jersey officials released a report titled "Dirty Dirt" that said dozens of brokers - including "organized crime associates and convicted felons" - were trucking dirt laced with carcinogens into the state and selling it as recycled topsoil.

In Loudoun County, residents have complained vigorously about an impromptu landfill on a farm. They estimate a pile of fill and other debris has grown as tall as 30 feet and contains some 28,000 truckloads of material on a spot zoned for a "personal recreational field." County officials have undertaken a protracted effort to get the property owner to clean it up.

Vega's problems began last winter. She began noticing the ground was shifting in her backyard, causing her fence to sag, according to the lawsuit. She started looking for a contractor when she came across Gainesville, Virginia-based E Trucking & Services. The company markets itself as a dumping, trucking, plowing and landscaping business. The dirt delivery is advertised as free.

"Dirt would be delivered in tri-axil dump trucks, carrying on average 10-12 cubic yards at a time," one ad on E Trucking's Facebook page reads. "We can deliver as much dirt as you need!"

Vega contacted the company and talked with Pereira. Pereira said he could dump dirt along the base of the fence to shore it up, according to the lawsuit. Vega said she reached a verbal agreement with Pereira that he would dump less than 2,500 square feet of dirt. Pereira disputes that, saying Vega kept increasing the amount she wanted.

Vega said she was distraught when she arrived home from her retreat to find the massive mound and a violation notice from the county. The dirt includes chunks of tar paper, cinder blocks and pieces of metal. She is having the dirt tested for contamination.

Vega's house is adjacent to Accotink Creek, the second-largest watershed in Fairfax County. Her property is bounded by a watershed management area (WMA), whose use is highly regulated, because water drains into the Chesapeake Bay. It is managed by the Fairfax County Park Authority.

The authority has demanded Vega replace four mature trees in the WMA, after their root bases were covered in dirt. Fairfax County has cited Vega for numerous other code violations related to the fill project. The dirt mound is now mostly covered by grass.

The lawsuit claims E Trucking failed to get the proper permit to carry out the project, but Pereira said that was Vega's responsibility. In Fairfax County, anyone undertaking "land disturbing activity" involving more than 2,500 square feet of dirt is required to submit a grading and conservation plan to the Department of Public Works and Environmental Services.

The lawsuit accuses E Trucking of dumping a large amount of dirt to avoid paying "tipping fees" it would normally have to pay to properly dispose of the dirt at a mandated landfill. Pereira denies that.

Eleanor Codding, division director of permitting and code administration of Land Development Services for Fairfax County, said officials have received five reports of problem dirt dumping since January, but Vega's is the worst. She said the county has not received any reports of contaminated dirt like the cases in New York and New Jersey and had not received reports about E Trucking.

Codding said people should be wary and conduct due diligence when dealing with a dirt broker. She pointed out that if any code violations occur, it is the property owner, not the dumper, who would face citations.

"One thing is if you see free dirt on Craigslist, be careful. If it's too good to be true, it probably is." Codding said. "Get a signed contract. And get three bids for a job."

(Except for the headline, this story has not been edited by NDTV staff and is published from a syndicated feed.)
Comments
Free dirtUS WomanUS woman sues