The stunt was made possible by a chip called VivoKey Apex which uses the same technology that makes Apple Pay and keyless entry at hotels work. 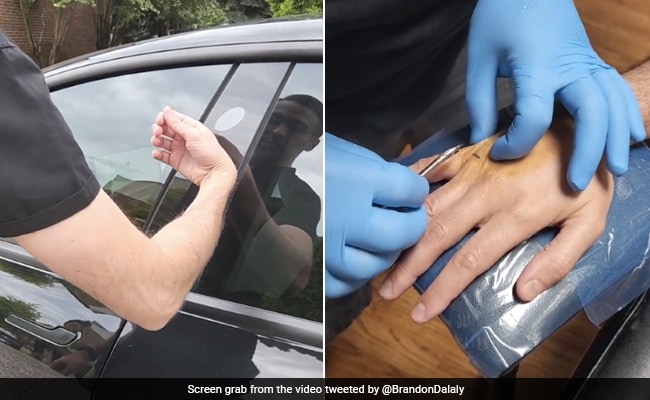 Mr Dalaly had the chip implanted into his right hand by a professional piercer for $400.

A small contactless chip implanted into the right hand of Tesla owner Brandon Dalaly is now all he needs to unlock his car.

Taking to social media, Mr Dalaly shared a video showing him having a tiny VivoKey Apex chip implanted in his right hand and then using the device to unlock his vehicle. "Finally decided to take my phone key issues into my own hands... literally. Tesla key chip implant," he wrote on Twitter while sharing a video of himself having the tiny chip inserted into his hand by a professional piercer.

Finally decided to take my phone key issues in to my own hands... literally. Tesla key chip implant. pic.twitter.com/RVK8ZaePoI

In the clip, Mr Dalaly is seen waving his right hand against the vehicle for a few moments before it unlocks. Since being shared, the video has taken the internet by storm.

Reacting to the post, one user wrote, "Ummm pretty weird, but it sucks to have something implanted that can't do more than opening a door". Another said, "let you start the car as well. So no need to have keys or the phone with you".

In the comment section, Mr Dalaly also addressed the concerns he heard from viewers of the video. He stated, "Just for awareness because there seems to be a lot of misinformation, The chip can also do things like store data, access control, otp 2 factor authentication, secure crypto wallet, and in the future credit card transactions. It's not just a Tesla key."

According to New York Post, the bizarre stunt was made possible by a chip called VivoKey Apex which uses the same technology, known as near-field communication (NFC) protocol, that makes Apple Pay and keyless entry at hotels work.

Mr Dalaly told Teslarati that he had the chip implanted into his right hand by a professional piercer for $400. He also stated that he is part of a beta group of about 100 people who are testing the chips before they are released to the public.

"The company that put this together literally has its own app store where you can wirelessly install apps into your body with these chips," he said, adding, "And one of the apps just happened to be a Tesla key card. So that was the first app I installed on it because I have a Tesla."

Mr Dalaly, who works in tech, told the outlet that he already has another smaller chip in his left hand that stores keys to his coronavirus vaccination card, his keys to his house, his contact card and other information. He said that the whole idea was that he would have his house key in his left hand and his car keys in his right hand.