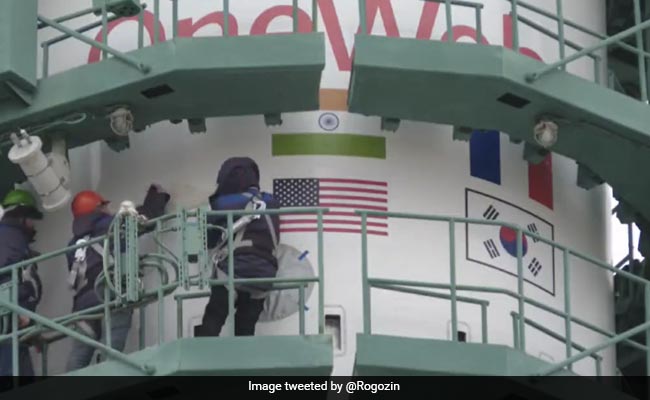 Russia's Roscosmos removes US and others' flags, keeps India's untouched

The Russian government's space agency has removed the flags of several nations including the US and Japan - but kept India's flag intact - painted on a massive rocket in the spaceport Baikonur.

The symbolic move by the space agency Roscosmos that shows ties between Russia and these nations have nosedived comes a week after Russia invaded Ukraine over the east European nation's attempts to join the North Atlantic Treaty Organisation, or NATO.

As Russian forces swept cities after cities in Ukraine, NATO member states France, Germany and the UK, and nations friendly to the US, such as Japan, have announced harsh sanctions that targeted trade and taken aggressive measures to cut off Russia from the sporting and cultural world.

"The launchers at Baikonur decided that without the flags of some countries, our rocket would look more beautiful," Roscosmos Director General Dmitry Olegovich Rogozin tweeted.

The tweet has a video that shows Russian workers at the spaceport erasing the flags of other nations. India's flag, however, remains untouched. India yesterday supported the international community's call for an immediate ceasefire after abstaining on a UN General Assembly resolution that strongly deplored Russia's aggression against Ukraine, the third abstention in less than a week by India. Russia has thanked India for its stand on the crisis.

Roscosmos, earlier known as the Russian Federal Space Agency, was formed in 1992 after merging the agency and United Rocket and Space Corporation, a joint-stock entity meant to bolster the space sector.

On the ground, Russian forces have taken the Black Sea port of Kherson in southern Ukraine, the first major city to fall after a string of setbacks for Moscow. They also pound and encircle the strategic port city of Mariupol, which is without water or electricity.