Watch: US TV Channel Remains On Air As Its Studio Floods After Heavy Rain 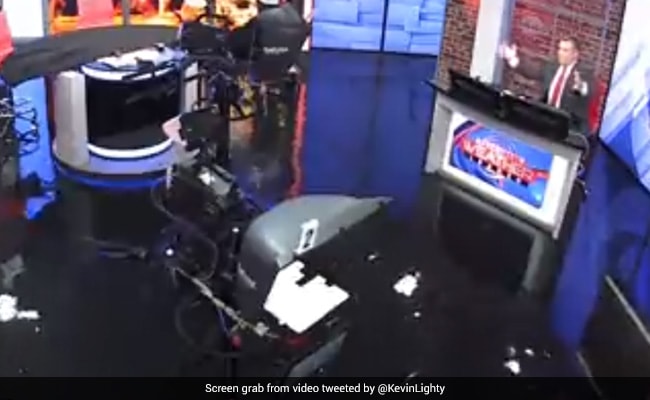 Illinois received several inches of rain due to thunderstorms.

A television station in Illinois kept broadcasting the news even after several inches of water from severe storm flooded the studio. The incident took place on Monday during which the newsroom and control room of WCIA were also flooded. The anchor of the Champaign-based television channel shared the footage on social media platforms, including Twitter, which showed the staff members wading through water reaching their ankles. It further said that there were localised reports of flash-flooding, as well as wind and hail damage due to the storms.

"There's literally a lake. There's a lake that's in the studio right now because of all of the heavy rainfall here that kind of came in," meteorologist Kevin Lighty said on air during the late Sunday night broadcast, according to the clip posted by him on Twitter.

Some clips last night during our severe coverage when the studio started flooding. #cILw#ILwxpic.twitter.com/VN2hKUPWC8

The video further showed staff moving furniture and equipment to save them from getting damaged.

"Sorry, guys. Oh, goodness. Oh goodness, yeah, OK," the anchor is further heard saying in the clip. "Well, our water is still coming in here and it's even worse in the back."

The technical equipment was spared from damage and the television channel kept giving updates about the path and impact of the storms across the area, said WCIA report.

On Monday, Mr Lighty posted some photos on Twitter showing the damage in the newsroom due to the storms. He also shared a video of his colleagues working amidst the loud sound of the fans drying the studio.

Have to give it to my colleagues in the @WCIA3 newsroom who have been working all day with these fans blowing non stop after the flood. The news doesn't stop, nor do we. pic.twitter.com/z3rSiETnU8

Newsweek said that strong thunderstorms hit central Illinois with hail as large as hen's eggs. The National Weather Service (NWS) in Lincoln posted a series of tweets that warned locals about possible flash floods and threats of "a tornado or two." NWS advised residents to "be prepared to seek immediate shelter".