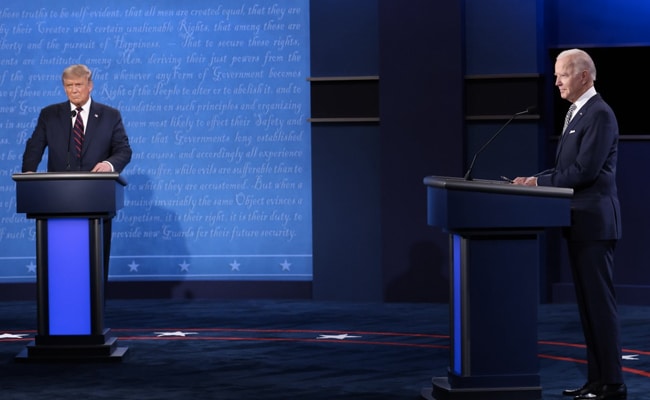 US Presidential Debate: The debate will last for an estimated 90 minutes.

US President Donald Trump today defended himself when questioned about a news report on the minimal amount of income tax paid by him, saying "I don't want to pay tax."

During the first presidential debate, moderator Chris Wallace asked the US President about The New York Times report which revealed that Trump paid $750 in federal income taxes in 2016 and 2017, and also he had paid no income taxes at all in 10 of the previous 15 years starting in 2000.

Trump, who disputes the report, was pressed to say how much he paid in taxes but declined. "I paid millions of dollars in taxes. Millions of dollars in income tax," he said. Then he said that he attempted to avoid taxes as much as possible, referencing tax breaks that he and others try to claim.

"I don't want to pay tax," he said. He added that private investors like himself, "unless they're stupid, they go through the laws and that's what it is."

Meanwhile, Joe Biden talked about his plans to repeal some of the tax cuts passed under Trump and impose taxes on companies that pay little to the US now, the President said that Joe Biden had served for many years and didn't take action. Joe Biden went right back at him, pointing out that he's actually proposing to raise taxes cut by Republicans. "You in fact passed that," Joe Biden said. "That was your tax proposal."

Here are the highlights from US Presidential Debate: :

Sep 30, 2020 08:04 (IST)
US Presidential Elections 2020: Donald Trump Claims He Is The Best
On why the electorate should vote for him, Donald Trump says, "There has never been an administration or a president who has done more than I have done in three and a half years." Biden, says, "Under this president, we've become weaker, sicker, poorer and more divided."
Sep 30, 2020 07:54 (IST)
Watch | "I paid millions of dollars in tax returns," US President Donald Trump on his taxes.

Watch | "I paid millions of dollars in tax returns," US President Donald Trump on his taxes#USPresidentialDebate2020#USElections2020pic.twitter.com/KQSJ0FggyR

Sep 30, 2020 07:50 (IST)
US Elections: Joe Biden Responds To Trump's Attacks On His Son
Trump and his allies have repeatedly made unfounded and false claims to allege that the former vice president and his son acted corruptly in Ukraine. 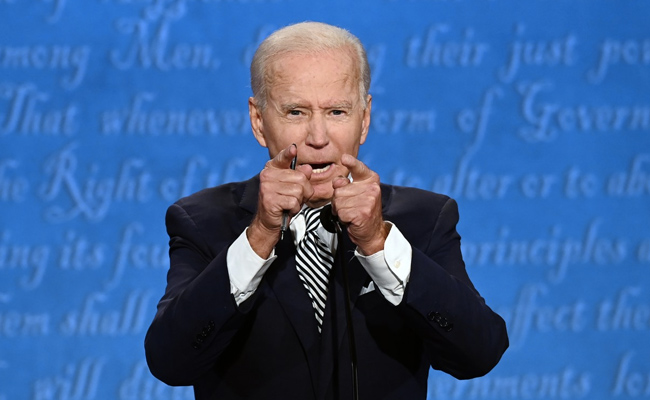 Sep 30, 2020 07:39 (IST)
US Elections 2020: Joe Biden Slams Trump As A "Clown" As Rivals Quarrel In Debate
Democratic presidential challenger Joe Biden called Republican incumbent Donald Trump a "clown" on Tuesday as tension boiled over in the pair's first televised debate ahead of the November election. "It's hard to get any word in with this clown -- excuse me, this person," said Biden, moments after Trump was warned by moderator Chris Wallace not to interrupt.
Sep 30, 2020 07:35 (IST)
US Elections 2020: We Believe In Law And Order, But You Don't, Says Trump
"We believe in law and order, but you don't. The people of this country want and demand law and order," Trump says. 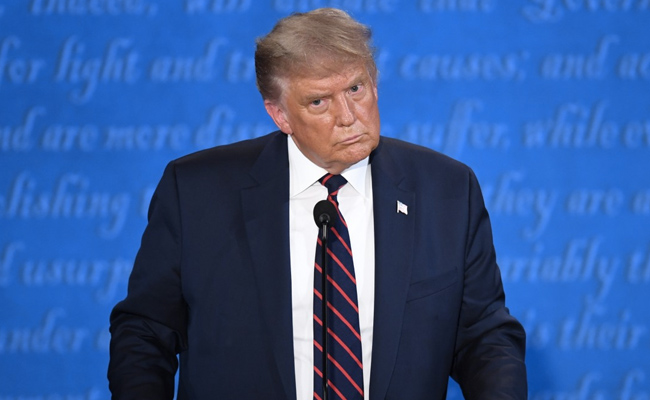 Sep 30, 2020 07:29 (IST)
US Elections: Joe Biden-Trump Face-Off At Presidential Debate
Democratic challenger Joe Biden on Tuesday branded President Donald Trump a liar and told him to "shut up" as the pair clashed in a bad-tempered start to their first televised debate. Read Here
Sep 30, 2020 07:22 (IST)
US Presidential Elections: Moderator Questions Trump On His Taxes
Moderator Chris Wallace questions Trump on his taxes: "How much did you pay?" Is it true you paid $750 in taxes in 2016? "I paid millions of dollars in tax returns," Trump says.
Sep 30, 2020 07:16 (IST)
US Elections 2020: Big Rallies Amid Coronavirus
Trump says he is holding big rallies amid coronavirus because "people want to hear what I have to say". Biden, meanwhile, says Trump has been "totally irresponsible" and is "a fool on this".
Sep 30, 2020 06:59 (IST)
Defending his new Supreme Court pick Amy Coney Barrett, Donald Trump says, "She's good in every way. I think she will be outstanding."
Sep 30, 2020 06:55 (IST)
Joe Biden Attacks Donald Trump Over Covid
"He waited and waited and waited. He still has no plan. 7 million contracted the virus," says Biden on Trump's handling of the crisis.
Sep 30, 2020 06:53 (IST)
Trump On Healthcare: "I Am Cutting Prices, Going With Favourite Nations"
The first topic of discussion is healthcare. The moderator asks Trump on his healthcare plan considering he is opposed to Obamacare. "I'm cutting drug prices by 80-90 per cent, and going with favourite nations," President Donald Trump responds.
Sep 30, 2020 06:50 (IST)
No Handshake At Start Of First Trump-Biden Presidential Debate
Republican President Donald Trump and Democratic rival Joe Biden did not shake hands or wear masks as they entered their first White House debate on Tuesday, adhering to protocols on social distancing during the coronavirus pandemic.
The two candidates entered the stage at the same time and smiled as moderator Chris Wallace of Fox News explained they would not shake hands. "How you doing, man?" Biden said, extending his arms towards Trump.
Sep 30, 2020 06:47 (IST)
Ivanka Trump posted a photo on Twitter as her father stakes the stage for the presidential debate.

Sep 30, 2020 06:38 (IST)
Donald Trump, Joe Biden Take Stage In First Presidential Debate
President Donald Trump and Democratic challenger Joe Biden took the stage Tuesday for their first televised debate, watched by a deeply divided nation 35 days ahead of the most tense US election in recent memory. There was no handshake as the two men took the stage and while this was due to Covid-19 restrictions, the absence of the traditional greeting symbolized the bitterness engulfing the country in the final countdown to November 3.
Sep 30, 2020 06:25 (IST)
It's debate night, so I've got my earpiece and performance enhancers ready, Joe Biden tweeted.

It's debate night, so I've got my earpiece and performance enhancers ready. pic.twitter.com/EhOiWdjh1b

Sep 30, 2020 06:24 (IST)
Ahead of the US presidential election on 3 November, Democrat leader Joe Biden and the incumbent Republican President Donald Trump will go head-to-head in their maiden debate Tuesday night (US time).