President Donald Trump traveled to his Virginia golf course for a second straight day Sunday, declining to concede the presidential race more than 24 hours after Biden had been declared the victor. 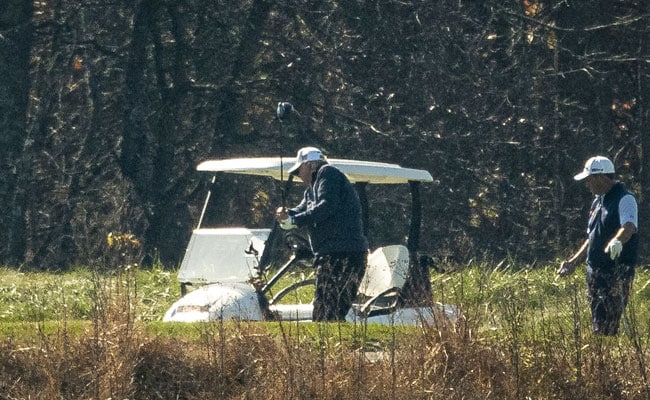 Trump has told others that he is never going to admit that he lost the race.

As President-elect Joe Biden accepted congratulations from world leaders and a former president on Sunday, the man he defeated continued to deny the reality of a transition that was taking place despite his unwillingness to participate.

President Donald Trump traveled to his Virginia golf course for a second straight day Sunday, declining to concede the presidential race more than 24 hours after Biden had been declared the victory. As Trump continued to make conspiratorial allegations of voter fraud without providing any evidence, Republican officials and allies splintered between nudging him to accept defeat and encouraging him to fight.

The president appeared fixated on doing the latter, using social media to cast doubt on the election process rather than prepare for a peaceful transition of power.

"Since when does the Lamestream Media call who our next president will be?" the president wrote on Twitter. "We have all learned a lot in the last two weeks!"

Media companies have made projections of expected winners in presidential races for decades, including after Trump's 2016 victory.

For the fifth consecutive day, Twitter flagged several of Trump's tweets as potential misinformation about elections as he made specious claims of vote rigging.

The platform also flagged a viral post by Trump campaign spokesman Tim Murtaugh that used an altered photo to make the case that the media can't be trusted to call elections.

Murtaugh had posted an image of the Trump campaign headquarters plastered in what appeared to be copies of a November 2000 front page of the Washington Times newspaper. The papers featured the headline "PRESIDENT GORE" and a picture of former vice president Al Gore, who ultimately lost that election by coming up short in the Florida tally.

Murtaugh called it "a reminder that the media doesn't select the President." The Times said in a post of its own that the image had been "doctored" and that no such headline had been printed.

Murtaugh later deleted the tweet, which became the latest example of the Trump campaign's flailing attempts to call the election process into question. In another instance, Trump's personal attorney, Rudy Giuliani, solicited his Twitter followers to help him explain alleged voting irregularities in Pennsylvania.

Meanwhile, Biden continued to move forward with his transition - launching a website and social media account for the 46th presidency - and accepting a congratulatory phone call from former president George W. Bush.

Trump's instincts to fight the election results were being fueled by his adult sons and Giuliani, according to several advisers who, like others, spoke on the condition of anonymity to discuss internal deliberations.

Feelings have been more mixed elsewhere in the president's orbit about whether he should continue to fight or move on, even as much of the world and country appear to be doing the latter.

Several senior aides to the Trump campaign met at its Arlington, Va., headquarters on Saturday to discuss options. Trump son-in-law Jared Kushner, who has been a constant presence at the headquarters in recent days, has encouraged the president to pursue every legal remedy he has to contest the results in the handful of swing states where Biden has been declared the victor or is leading, officials said. 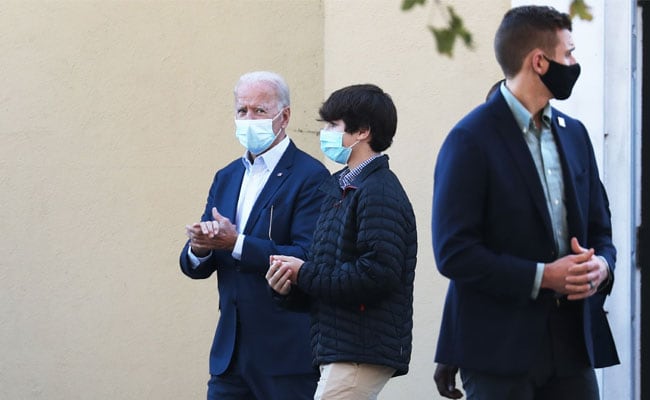 Messages of congratulations for Biden and Vice President-elect Kamala Harris rolled in from around the globe.

Former White House counselor and 2016 campaign manager Kellyanne Conway is among the advisers encouraging the president to accept defeat and preserve his political brand as a Republican kingmaker, officials said. Advisers including Ronna McDaniel, who leads the Republican National Committee, are publicly fighting on behalf of the president but have acknowledged to others privately that the battle cannot go on for too long, according to three people with knowledge of the matter.

Others said the president himself probably realized that he has limited options to turn things around and would soon accept reality.

"I think he knows in his heart of hearts where things are heading, but I think he also is of the mind that America - and especially his people - love a fighter," said a senior administration official.

The official said Trump's allies had bemoaned the lack of message discipline by the president and some of his supporters after the election. Trump had called for ballot counting to stop in certain states where his position was weakening while also celebrating the ongoing vote tabulation in states where he was gaining ground. He and Giuliani have promised soon-to-come evidence of massive fraud but so far have failed to deliver it.

Giuliani is largely viewed as an albatross within the campaign and the White House, officials said. A widely panned news conference he held Saturday in front of a landscaping company in Philadelphia was described by one official as "a Rudy special." Trump has continued to remain in contact with Giuliani, however.

At one point, Trump campaign adviser Jason Miller told surrogates to stay off television, amid confusion about what the message should be as Biden neared and then secured the 270 electoral college votes required to claim the presidency.

Trump has told others that he is never going to admit that he lost the race, according to two officials who said the president does not believe that Biden won.

Chris Ruddy, a longtime Trump friend and chief executive of the conservative Newsmax Media, said the president should hold out on conceding until the results are certified.

"It doesn't take a long time. There is time provided for this exact thing. Why not use it?" he said, claiming that Democrats' strong performance with mail-in ballots left them at a greater risk of having votes invalidated as defective.

"Where constitutionally does it say where ABC, CBS, Fox News decides who the president is?" he asked, echoing a talking point from many of Trump's conservative supporters after Biden's victory.

Inside the White House, one senior administration official said some of his colleagues are looking for jobs - and others are looking to fight.

"Most people know it's over, but there are some holdouts," the official said.

Some Trump aides have tried to appeal to his self-interest in urging him to protect his image and floating the prospect of a another presidential run in 2024. Several officials said they expected Trump to run again, or at least tease the possibility of another bid to maintain maximum leverage within the Republican Party after leaving office.

Trump's campaign continued to raise funds for a legal battle on Sunday, as allies previewed a Monday rush of legal filings and public allegations of voter fraud that they hoped would help shift public opinion back in the president's favor.

First lady Melania Trump took to Twitter to echo the campaign's central talking point that all legal votes should be counted - something largely undisputed by either party.

"The American people deserve fair elections," she wrote. "Every legal - not illegal - vote should be counted. We must protect our democracy with complete transparency."

Despite the president's intransigence, the machinery of a coming transfer of power moved forward Sunday. Messages of congratulations for Biden and Vice President-elect Kamala Harris rolled in from around the globe, with various world leaders pledging to work with them. Activist groups reached out to make their case to the incoming administration. Biden prepared executive orders to sign on Jan. 20 and said he would announce a task force Monday to take on the coronavirus pandemic.

While most Republicans continued to remain silent about the election results, a few began to publicly acknowledge Biden's victory.

"Congratulations to Preselect Biden on a successful campaign," Rep. Francis Rooney of Florida wrote Sunday on Twitter. "All Americans need to come together to support Preselect Biden."

Other Republicans appeared resigned to waiting for Trump to accept that his presidency is ending.

"You're not going to change the nature of President Trump in these last days, apparently, of his presidency. He is who he is," Sen. Mitt Romney of Utah, who has acknowledged Biden's win, said Sunday on CNN's "State of the Union." "And he has a relatively relaxed relationship with the truth. And so he's going to - he's going to keep on fighting until the very end."

In addition to Rooney and Romney, the Republican lawmakers who have accepted Biden's victory include at least three governors, one senator and seven members of the House.

Trump has privately complained that more Republicans are not publicly supporting him, officials said.

The General Services Administration, which runs the federal transition process, has not officially determined that Biden is the winner, according to spokeswoman Pamela Pennington.

Neither Trump nor Vice President Mike Pence have spoken publicly in recent days - with Pence staying completely out of the public eye since shortly after the polls closed Tuesday. Trump spent hours at his golf course on Saturday and Sunday but made no public remarks.

One campaign adviser said there had been discussion of trying to get Trump to participate in traditional presidential activities, but officials ultimately made the determination that "we need to let the legal process take place."

Trump was expected to have no public events on his schedule for a fourth consecutive day on Monday.

How Trump handles his remaining weeks in office could be pivotal for his brand and the body politic. The country continues to face a record surge of coronavirus cases even as it deals with the unprecedented circumstance of a president refusing to concede an election and commit to a peaceful transfer of power. Such a confluence of crises could be particularly dangerous, said Barbara Perry, a presidential historian at the University of Virginia's Miller Center.

"The pandemic and resulting economic catastrophe that produced Trump's defeat now require him to relinquish power as all 44 presidents before him have done," she said. "Yet the anti-democratic, demagogic traits that paved his way to the Oval Office will now simply not allow him to 'stand down' in the tradition of every president from George Washington to Barack Obama."