In Trump's Attack On Philadelphia Over "Election Integrity", A Typo

US election results 2020: Donald Trump is not new to making spelling mistake in his tweets 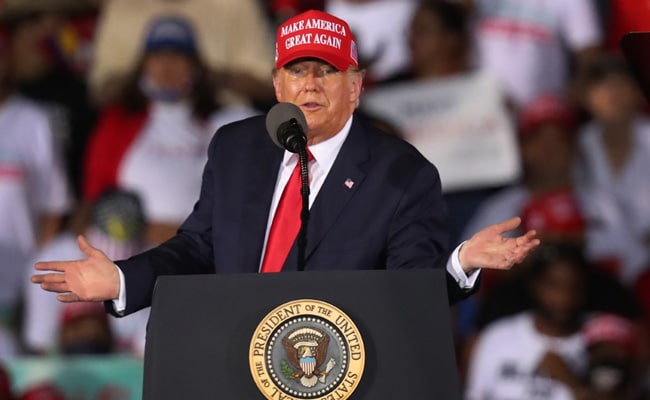 US President Donald Trump has been tweeting furiously as his rival Joe Biden races ahead in key states, including Pennsylvania. The majority of votes left to be counted are in Democratic-leaning areas such as greater Philadelphia, a city in Pennsylvania.

To this, President Trump tweeted, "Philadelpiha has got a rotten history on election integrity."

"Philadelpiha has got a rotten history on election integrity." @Varneyco@FoxBusiness

But President Trump misspelt the name of the city, also known as "Philly" to its residents.

The incumbent US President is not new to making spelling mistake in his tweets.

Just before the last US presidential election in 2016 also, Donald Trump was left embarrassed after making three spelling mistakes in one 21-word tweet attacking Hillary Clinton.

In a tweet criticising Hillary Clinton, Donald Trump wrote: "Hillary Clinton should not be given national security briefings in that she is a lose cannon with extraordinarily bad judgement & insticts."

However, Twitter users were quick to point out the three spelling mistakes in his short tweet: "lose" instead of "loose", "insticts" instead of "instincts", and "judgement" instead of the correct US spelling of the word, "judgment".

The result of the US presidential election hangs in balance today as a handful of battleground states complete their vote counts, but Joe Biden was edging toward victory - barring a surprise.

Mr Biden has got 253 of the 270 electoral votes that he needs, according to US media projections, and has taken the lead in Pennsylvania, which would put him over the top.

President Trump has won 214 electoral votes so far, and while the Republican incumbent was still in contention in several states that could afford him a path to re-election, that path was narrowing.