US and UN demand details on how Gaddafi died 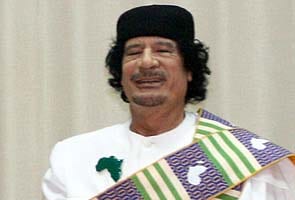 Misurata, Libya: International calls mounted Friday for Libya's interim leaders to provide a fuller accounting of the final moments before Col. Muammar el-Gaddafi's violent, messy death, as new videos circulated that showed him and his son Muatassim alive, apparently while in the custody of the former rebels.

The United Nations and two leading human rights groups called for a thorough investigation into precisely how Colonel Gaddafi, who was seen on the Internet in cellphone videos bleeding and heaving as he was manhandled by screaming fighters, wound up dead with what appeared to be bullet wounds to the head.

One video in particular was receiving heightened scrutiny on Friday because it showed a conscious Colonel Gaddafi wiping blood off the left side of his face, revealing no bullet wound. Later videos of his corpse showed a bullet wound in the same spot, adding to skepticism about the interim government's official explanation that he was accidentally killed during a shootout with Gaddafi loyalists.

The United States, which along with other major Western powers heartily congratulated the Libyan people on Thursday as news of Colonel Gaddafi's death was announced, also said that Libya's post-Gaddafi leaders must furnish a detailed explanation of how he had died.
Officials with the interim government indicated that they would pursue an investigation, although senior military leaders in Misurata, where the bodies were taken, said they saw no need for one.

In Misurata, which harbors special antipathy toward Colonel Gaddafi because of his military's vicious assault here during the struggle to oust him, there appeared to be little concern about the manner of the deaths.

At an ad hoc viewing ceremony in a shopping center at the edge of town, giddy men and children lined up to see the colonel's body, lying on a mattress in a meat locker. All that seemed to matter was that he was gone.

"I felt joy," said Mustafa Ali, 37, who is unemployed, as he left the meat locker. "How long have we been waiting for this? We have martyrs, and this is his penalty."
As night fell, fireworks lighted up the city's skies.

The Transitional National Council, the shaky interim government in Tripoli, had said initially that Colonel Gaddafi would be buried on Friday in accordance with Islamic law, which generally requires a burial as soon as possible, but that the grave site had not been determined.

But Ali Tarhouni, the finance and oil minister, said the burial would be delayed pending an investigation into the circumstances surrounding Colonel Gaddafi's death and a decision about where to bury him. Officials gave no specifics about the timing or possible location.
Mahmoud Jibril, the interim prime minister, visiting the colonel's body in the meat locker, said the burial could take place in the next 48 hours.

The death of Colonel Gaddafi, who was found Thursday hiding in a drainpipe after two months on the run, was a moment of national catharsis in the country he had ruled for 42 years. The interim government said it would formally declare Libya's liberation on Sunday in the eastern city of Benghazi, where the revolution to oust him began in February. Officials said Mustafa Abdel-Jalil, the chairman of the Transitional National Council, would make the proclamation.
Council officials have not said whether Colonel Gaddafi's son Muatassim was found dead or alive. But a new video circulated Friday showing the son, too, had been captured alive.

The video showed him sitting upright, smoking a cigarette and wearing a blood-stained shirt. Reporters and photographers who saw his body said it had wounds in the neck and chest.
The whereabouts of another Gaddafi son, Seif al-Islam, who had been reported captured or wounded on Thursday, were unknown, and there were rumors that he may have fled to Niger.
Navi Pillay, the top United Nations human rights official, formally requested an investigation into Colonel Gaddafi's death. Amnesty International and Human Rights Watch also urged the new Libyan authorities to investigate the killing.

Mark Toner, a State Department spokesman, told reporters in Washington on Friday that Libya's interim government had "pledged to provide a full accounting of what happened, what transpired leading up to his death. And we look to them to do that."

The interim government has ignored calls by its allies for similar investigations before, quietly dropping an inquiry into the controversial killing of its top military official in July.

In Misurata, two senior security officials dismissed the need for an investigation, saying the interim government's explanation of what happened - that the colonel and his son had died of injuries sustained on the battlefield - was plausible enough.

Ibrahim el-Sharkasy, the head of the local security committee in Misurata, left open the possibility that Colonel Gaddafi had been executed but said it was more likely that he had been shot and killed during skirmishes. "What investigation?" he said, adding that that the military authorities did not investigate fights on the battlefield.

A senior official in the city's military intelligence service, Col. Ismail Shukri, said it was possible that Muatassim, despite appearing alert in the video, had died of internal bleeding. Another video, he said, showed Muatassim lying down with his hand across his face.

Colonel Shukri, who said he had questioned senior Gaddafi aides in recent days, said that Colonel Gaddafi had been in Surt, his birthplace, since Tripoli fell on Aug. 21, having traveled there in a convoy of about 25 cars. Once there, he moved from house to house. Colonel Shukri said that the ill-fated decision to flee the city in a convoy on Thursday had been made by Muatassim, who was directing military operations for the loyalist forces in Surt.

The plan had been to travel to a small town west of Surt, and then head south through the open desert.

"It was a desperate decision," the colonel said. "It was a failed decision."
NATO forces spotted the convoy before it had traveled two miles, and called in a French airstrike.

NATO said Friday that the strike had destroyed at least 11 of the vehicles, and had probably contributed to Colonel Gaddafi's capture. Anti-Gaddafi fighters arriving soon after the attack described a scene of mass destruction, with as many as 50 bodies scattered about and the charred remains of victims still sitting in the driver's seats of the destroyed vehicles.

Promoted
Listen to the latest songs, only on JioSaavn.com
At NATO headquarters in Brussels on Friday, the alliance's secretary general, Anders Fogh Rasmussen, said that it would seek to end operations in Libya on Oct. 31 but that a formal decision would be made early next week.  For now, he told a news conference, NATO would "monitor the situation and retain the capacity to respond to threats to civilians if needed."
NATO has been conducting aerial assaults on Colonel Gaddafi's forces since March under a United Nations Security Council resolution to protect Libyan civilians. The assaults were widely credited with helping the rebels overthrow him.