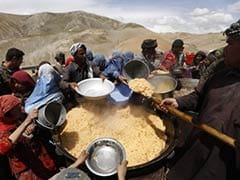 Villagers displaced by the recent deadly landslide receive their lunch in the Argo district of Badakhshan province May 7, 2014.

New Delhi: The United Nations says delivery of aid to thousands of victims of a devastating landslide in Afghanistan is being hampered by increasing numbers of outsiders flocking to the area, attracted by the large amount of relief supplies.

At least 500 people have been killed and over 2,000 remain missing after heavy rains triggered a landslide on Friday which sent a deluge of mud and rocks crashing on top of a village in the remote Badakhshan province, bordering Tajikistan.

Around 700 families in Aab Bareek village in Argo district have been displaced, says the U.N., with some 300 houses completely buried in mud. Each family has around five members.

"Access challenges at the site are now impeding the assessment of needs and the delivery of assistance, as more and more people from outside the immediate community are congregating at the disaster site," said the latest report from the U.N. Office for the Coordination of Humanitarian Affairs (UNOCHA).

"Aid agencies are increasingly challenged to distinguish between those directly affected by the disaster and those who have come from outside the village, attracted by the quantity of relief items arriving."

Aid workers say a large number of humanitarian actors - including international and local aid groups, U.N. agencies, foreign governments, local businessmen and even private individuals - have descended on the impoverished village since news emerged of the massive disaster five days ago.

Distributions of relief materials such as dry food rations, blankets, cooking utensils and tarpaulin sheets have been happening indiscriminately without proper assessment and coordination.

Many unaffected people were given aid in the initial period and now increasing numbers from outside have moved into the area for handouts, aid workers said.

This has not only slowed aid distributions, but also led to unequal delivery - where some people are getting more than others - angering genuine victims and leading to tensions in the area.

Clashes have broken out and on Tuesday Afghan police were forced to fire gunshots into the air to disperse villagers, who fought police and aid workers distributing supplies.

The Geneva-based International Organisation for Migration (IOM) had to temporarily halt aid distribution due to the shooting and insecurity.

Afghanistan is extremely susceptible to natural disasters due to its geographical location and years of environmental degradation.

The heavy rains which triggered the landslide have also sparked flash floods which have inundated villages and forced tens of thousands of people to flee their homes in the north of country over the past month.

The U.N. said fresh floods in new areas meant the number affected had risen to more than 90,000 people across 14 provinces in the country. More than 160 people have been killed.

The flood waters have damaged homes, public infrastructure, roads and thousands of hectares of agricultural land in some of the worst affected provinces of Jawzjan, Faryab and Sar-E-Pul.

Promoted
Listen to the latest songs, only on JioSaavn.com
The U.N. said over 20,500 livestock had died and the majority of fish ponds and rivers were full of mud, while some 5,400 houses were damaged. Around 730 km (450 miles) of roads, 55 mills, 41 small power stations, irrigation canals and dams have also been destroyed or damaged by the flooding. This, it said, will have significant implications for trade and markets in affected areas.

"The focus of efforts going forward should be rehabilitation and reconstruction of the damaged houses and infrastructure, as well as securing livelihoods for those who have lost their farming land," said the UNOCHA report.
© Thomson Reuters 2014