Emergency in seven counties stretching from Tampa Bay south to the fringe of the Everglades, as toxic algae makes breathing difficult for people. 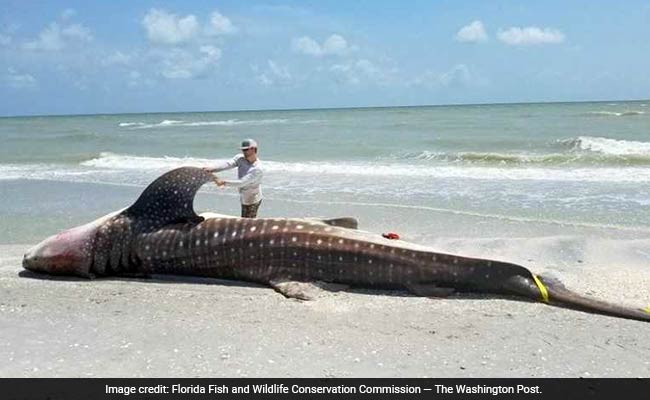 Biologists perform a necropsy on a whale shark that died in Florida waters.

Florida's governor this week made official what residents of Southwest Florida already knew: The bloom of toxic algae that has darkened Gulf waters is an emergency. The red tide has made breathing difficult for locals, scared away tourists, and strewn popular beaches with the stinking carcasses of fish, eels, porpoises, turtles, manatees and one 26-foot whale shark.

The governor is facing Sen. Bill Nelson, D, this fall at the ballot box in a contest for the senate seat Nelson has held for three terms. Each man has accused the other of failing to tackle the red tide calamity and the simultaneous bloom of a different type of algae that is clogging rivers and canals and putting a scum on top of Lake Okeechobee.

Citizens in retirement communities are reporting respiratory distress from the vapors of the microscopic red tide organism called Karenia brevis. A recent study found a 50 percent spike in hospital visits due to respiratory problems during red tide blooms.

The red tide has been gradually moving north, to the mouth of Tampa Bay, according to state tracking data. For many places, the daily reports continue to say "Water Color: Dark" and "Respiratory Irritation: Intense." Worst of all are the reports that state "Dead Fish: Heavy."

"There's no fish left. Red tide killed them all," he said. "All of our concentrations of red tide are still high, and would still kill fish if they were out there."

The algae lurk in seawater for most of the year, but the past two months have produced a nonstop assault of high concentration for reasons that have eluded researchers, said Kelly Richmond, a spokeswoman for the Florida Fish and Wildlife Conservation Commission.

The toxins can aerosolize in the wind that drifts ashore, triggering respiratory problems or worsening conditions such as asthma. That has incited many tourists and some locals to flee.

Sea turtles have been hit hard, with more than 300 dead from the red tide in the affected counties, according to the Associated Press.

Gov. Scott's declaration came one day after thousands of Floridians engaged in a grassroots collective action on Florida beaches. At 10:15 a.m. Sunday they lined up at the water's edge and held hands, an image captured by drones. They were trying to grab public attention.

"I can't even let my cats out on the lanai," said Amy Ernst, a Sarasota printmaker who lives near the beach. "Eyes burning, throat burning, sinus problems."

Adrienne Miceli-Trask, 52, a salon owner who helped organized the Hands Along the Water protest in Sarasota, said, "It's not just on the beach, it's in our intracoastal waterway. It's in the air. It's toxic. Somebody's backyard on the intracoastal is totally filled with dead fish. It's disgusting."

Scientists are trying to figure out why, exactly, the current red tide along the Gulf Coast has been so protracted and deadly. State officials and scientists point out that, at base, this is a natural phenomenon. Fish die-offs were noted by Spanish explorers in the 1500s and have been well documented since the 1840s.

But the incidences of red tides seem to have increased since the 1950s and 1960s. Climate change could be a factor: warmer waters, up to a certain point, are congenial to algal growth. The Gulf's surface temperature has warmed by about 2 degrees Fahrenheit since 1977.

There's a more direct human handprint on the current crisis: Florida's landscape and the flow of water have been radically altered by agriculture, canals, ditches, dikes, levees and the sprawling housing developments that have sprouted as the state's population has boomed. Bartleson said Lee County used to be 50 percent wetlands and is now about 10 percent wetlands.

In the old days, he said, rainwater slowly filtered into the aquifer or seeped into estuaries. Now it rushes rapidly, unfiltered, into rivers and bays and into the Gulf, typically loaded with agricultural nutrients such as nitrogen and phosphorous, which feed the algae.

Hurricane Irma struck the state head-on last September, and the red tide bloom began about a month later. The U.S. Army Corps of Engineers was forced to release massive amounts of nutrient-laden water from Lake Okeechobee to prevent the overtopping of the venerable Hoover Dike. Those nutrients fueled green algae in the inland canals and rivers and flowed through the Caloosahatchee River into the shallow waters along the Gulf Coast. That plausibly fueled the red tide bloom. Some scientists hesitate to declare a direct cause and effect, though Bartleson says of the current red tide, "It's on steroids with our nutrients."

Researchers have experimented with ways of killing the toxic algae, but they are proceeding cautiously because they don't know what effects it could have on the ecosystem.

The Karenia brevis algal bloom is made up of millions of tiny, single-celled plant-like organisms. Like many plants on land, they produce chemicals as a defense. One of these weapons is the brevetoxin compound.

"The ocean has thousands of species of algae. Really only a little bit more than a hundred that produce toxins that are dangerous to us. Algae in general are hugely important to marine life," said Don Anderson, the director of the United States Office for Harmful Algal Blooms, based at the Woods Hole Oceanographic Institution.

Historically, algal blooms become more prevalent in the fall and decline in late winter and spring. Less rainfall and increased wind could potentially ease this deadly red tide. For now, there's no end in sight.

(Except for the headline, this story has not been edited by NDTV staff and is published from a syndicated feed.)
Comments
Red Tide AlgaeFloridaWhale Shark