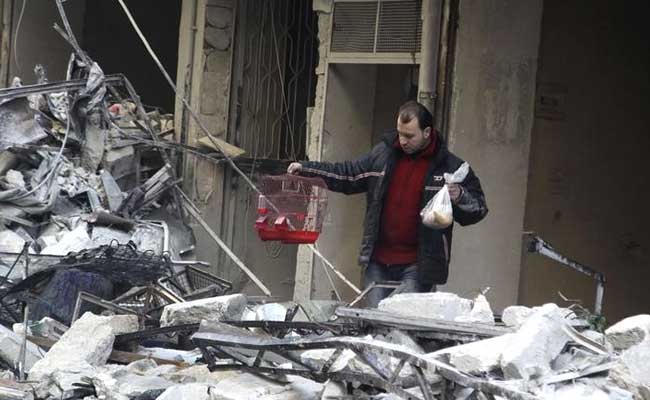 A man carries a bird cage after air strikes by pro-Syrian government forces in the rebel-held Al-Shaar nighbourhood of Aleppo. (Reuters Photo)

Beirut: The commander of a US-supported Syrian rebel group said today the northern countryside of Aleppo province was completely encircled by Syrian government forces and its allies and heavy Russian bombardment continued.

The assault in northern Aleppo province, backed by hundreds of Russian air strikes there, has also prompted tens of thousands of people to flee towards the Turkish border and helped derail peace talks in Geneva.

"The Russian cover continues night and day, there were more than 250 air strikes on this area in one day," he told Reuters.

"The regime is now trying to expand the area it has taken control of," he said. "Now the northern countryside (of Aleppo province) is totally encircled, and the humanitarian situation is very difficult."

Hezbollah's Al Manar television said government forces and allied fighters had taken over the town of Ratyan, which lies close to areas they captured on Wednesday.

The Britain-based Syrian Observatory for Human Rights confirmed the "symbolic" capture of Ratyan, but Haj Ali said it had not yet fallen.

"There are very heavy battles in Ratyan, and an attempt by the regime to storm it. But until now they haven't been able to enter," he said.

"We demand daily more support, but the issue of anti-aircraft (weapons) has become a dream ... the dream that will not come true," he said.

US-made TOW missiles, or guided anti-tank missiles, are the most potent weapon in the rebel arsenal and have been supplied to vetted rebel groups as part of a programme of military support overseen by the Central Intelligence Agency.

But while they have helped rebels to slow advances on the ground, they are of little use against fighter bombers.
© Thomson Reuters 2016