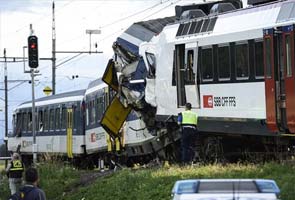 Granes-Pres-Marnand, Switzerland: Swiss investigators today pointed to signal-jumping as the likely cause of a head-on train collision in the west of the country that killed a driver and injured 26 other people.

"The investigation focuses on the likelihood that the train travelling from Payerne failed to respect a signal," Jean-Christophe Sauterel, police spokesman for Switzerland's Vaud region, told reporters.

The crash between two local trains occurred at around 7:00 pm (2230 IST) Monday just outside the station in Granges-pres-Mornand, a village between the Geneva and Neuchatel lakes in Switzerland's French-speaking region.

One train had been travelling from the town of Payerne to the lakeside city of Lausanne, 38 kilometres to the south, while the other one, a faster regional service, was travelling north from Lausanne.

The driver of the northbound train, a 24-year-old French citizen who lived in the region, was killed in the collision. His body was pulled from the wreckage early Tuesday after a frantic rescue operation.

Daniel Antonez, a resident of nearby Moudon, said he had heard the impact.

"It's one I often take. I'm sure I know some people who were on the train," he said.

Flanked by cornfields, the two mangled trains were still on the track today, both engines locked into each other and lifted slightly off the ground as workers used beams to prepare to remove them.

Forty-six people were believed to have been travelling on the two trains. Police did not rule out the possibility of finding another victim in the wreckage.

"Two adults and a child are still in hospital out of the 23 recorded injured, but their lives are not in danger," said Jocelyn Corniche, the emergency services' chief physician.

The relatively slow speed of the southbound train, 40 kilometres per hour, appeared to be one explanation why more people had not died. The speed of the northbound train has yet to be confirmed.

Accident investigators were still trying to understand why the southbound train, operating a slower service between a string of communities, failed to wait for the passage of the faster northbound service, which does not stop at Granges-pres-Marnand.

Sauterel stressed that the issue of criminal responsiblity for the crash was not under discussion for the moment.

"The management and employees of the CFF are shocked by the death of their colleague," the company said in a statement.

Rescuers had worked into the night under arc lamps, using special equipment to cut through the wreckage and reach the missing driver.

They retrieved his body at 1:30 am (0500 IST) Tuesday but it was not clear whether he had died on impact.

The collision came in the wake of the July 24 tragedy in Santiago de Compostela, when a speeding train flew off the rails, killing 79 people. A crash in suburban Paris a week earlier left seven dead.

"It makes your blood run cold," Swiss resident Antonez said, referring to the string of rail accidents in Europe.

Promoted
Listen to the latest songs, only on JioSaavn.com
In 2003, 45 people were injured in a train crash in Zurich.