Spanish Couple Go on Trial Over Murder of Adoptive Daughter 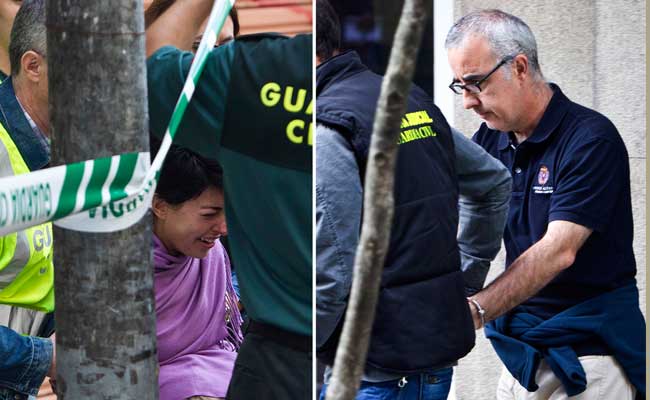 The couple escorted out of their house, while the officals investigate. (AFP Photo)

Madrid, Spain: A Spanish couple accused of drugging and suffocating their 12-year-old daughter who they adopted in China went on trial on Tuesday in a case that has drawn the attention of Beijing.

Rosario Porto, a 46-year-old lawyer, and her ex-husband, 51-year-old journalist Alfonso Basterra, were charged with murder in October 2013, a month after the body of their daughter was found in a wood near the northwestern city of Santiago de Compostela.

Porto had told police that the girl, Asunta Yong Fang Basterra Porto, had gone missing after she was left alone at her apartment in Santiago.

A Chinese foreign ministry spokesman said at the time that Beijing was "highly concerned about the case" and urged Spain "to launch an investigation at once".

He also called on Spanish authorities to "hold the perpetrators to justice and take concrete measures to ensure the safety as well as the legitimate rights and interests of adopted Chinese children".

The judge investigating the case accused the couple in a summary judgement of having drugged Asunta with the sedative Orfidal for three months before asphyxiating her on September 21, 2013.

He wrote in the summary that Basterra "administered to the child a toxic dose of Orfidal" at his home on that date, "to deprive her of all will and defence and presumably to ease the action of asphyxiation, in a plan agreed with Rosario".

Porto, a Spanish citizen who acted as French honorary consul in Galicia from 1996-2006, and Basterra have both denied having killed Asunta, who they adopted in China when she was still a baby.

At the time of the girl's death, the couple were separated but were raising their adopted daughter together.

Their trial began at a court in Santiago with the closed door selection of the nine members of the jury.

The accused couple will start being questioned in court on Thursday.

The court has called 84 witnesses and 60 experts to testify.

The trial is scheduled to last until October 21. If found guilty the couple face a prison sentence of up to 20 years.