Staff were dismissed for staging "a fake photograph to support a false claim (widely reported in international media outlets) that they were 'forced to sleep on the floor' of the Malaga crew room," authorities said. 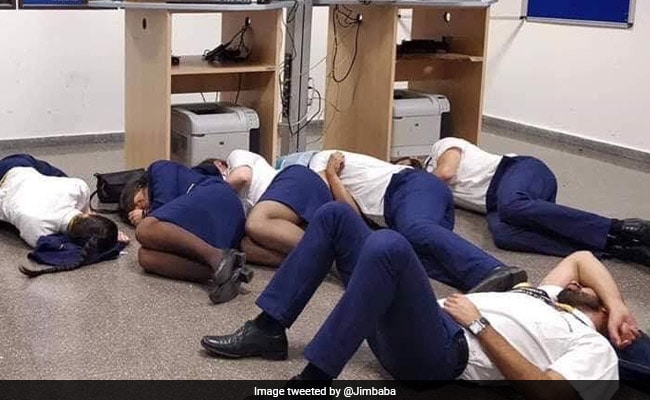 Six cabin crew took a picture of themselves simulating having to sleep on airport floor in Spain.

Ryanair said on Wednesday it had fired six cabin crew who took a photograph of themselves simulating having to sleep on the floor in Spain's Malaga airport as part of a protest over conditions.

The low-cost carrier said the staff were dismissed for staging "a fake photograph to support a false claim (widely reported in international media outlets) that they were 'forced to sleep on the floor' of the Malaga crew room."

It added this had damaged the airline's reputation, just as Ryanair is engaged in a struggle with European cabin crew members as well as various governments over working conditions and claims of its disregard for national labour laws.

Unions said that on October 14, as storms raged in southern Spain and Portugal, more than 20 cabin crew had to spend the night at Malaga airport.

They were put in the Ryanair crew room overnight and then moved to a VIP lounge normally used by clients at around six in the morning, both equipped with only chairs or sofas, Spain's SITCPLA cabin crew union said.

During that time, six Portugal-based employees decided to lie on the floor for the photo in protest at what they slammed as inadequate accommodation.

Ryanair's chief operations officer Peter Bellew apologised on Twitter, saying that "all hotels were completely booked out in Malaga."

"Apologies to the crew we could not find accommodation."

Luciana Passo, head of Portugal's SNPVAC union, acknowledged it was a protest photo. "There were 24 cabin crew members in a room with eight chairs," she said according to local news agency Lusa.

"Some of them decided to show their indignation by lying on the floor as the other chairs were taken, and one person, who wasn't part of the crew, decided to publish the photo on social media. And they end up fired."

SITCPLA meanwhile questioned whether it really was impossible to find hotels in a tourist magnet such as Malaga and its surroundings in southern Spain, especially in low season October.

Ryanair has been hit by strikes by cabin crew members for months. This has forced the airline to start recognising some cabin crew and pilots unions as it looks to avoid further stoppages.