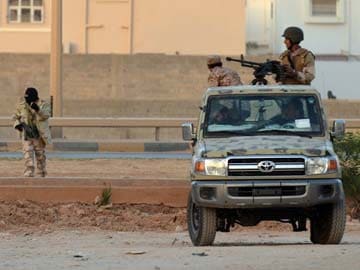 Libyan men loyal to rogue general Khalifa Haftar take position during clashes against Islamists in the eastern Libyan city of Benghazi on June 2, 2014 which left at least 18 people killed

Benghazi: A rogue Libyan general, who has led repeated deadly assaults on jihadists in second city Benghazi, escaped a suicide attack on Wednesday, one of his commanders told AFP.

But three loyalists of former general and longtime US exile Khalifa Haftar were killed in the attack on a villa outside the eastern city, the commander said.

"A suicide bomber in a vehicle packed with explosives attacked a villa where we had gathered," said General Sagr al-Jerushi, who heads the air wing Haftar has deployed in his attacks.

"Three of our soldiers were killed," Jerushi said, adding that he himself had been "lightly wounded" in the attack.

It is the first attack against Haftar since he launched his offensive, dubbed "Operation Dignity," aimed at eradicating "terrorists" in Benghazi on May 16.

The former general claims his forces represent the legitimate Libyan army and has won the support of regular army units in the city including the special forces.

But even though he denies any political ambitions, the outgoing Islamist-led parliament in Tripoli accuses him of plotting a coup and has branded him an outlaw.

Since the 2011 uprising that toppled and killed longtime dictator Moamer Kadhafi, the country has been awash with weapons.

Militias of former rebels who fought to oust the Kadhafi regime have refused to hand over their weapons and control swathes of territory across the country.

Benghazi is considered a stronghold of Islamist militias, and the city has seen near daily attacks on security forces that have been blamed on jihadist groups.

Al-Qaeda in the Islamic Maghreb on Sunday urged Libyans to fight Haftar, labelling him an "enemy of Islam".

Promoted
Listen to the latest songs, only on JioSaavn.com
Ansar al-Sharia, a radical Islamist group in Benghazi classified by Washington as a "terrorist organisation," has warned that Haftar could suffer the same fate as Kadhafi, who was killed by rebels in October 2011.

Its forces have borne the brunt of the offensive led by Haftar.