Man, Enraged With TV Ad, Threatens To Shoot "Head Off" US Congressman

Randall E. Tarr could receive up to 15 years in prison if convicted of communicating a threat to injure a person and making a threat to a federal official. FBI officials interviewed Tarr after his call late last month to the congressman's Decatur office, according to law enforcement. 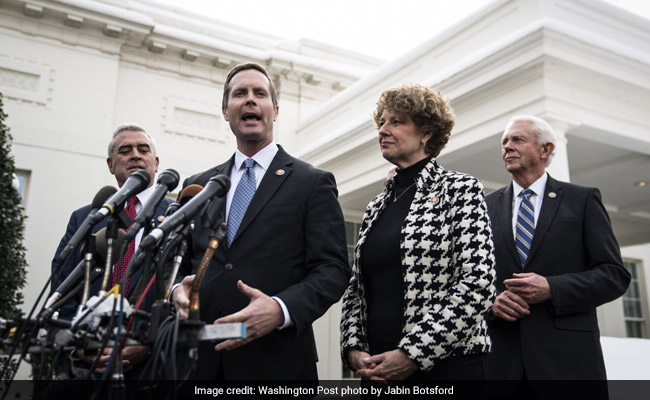 A man faces federal charges for allegedly threatening to kill a Republican congressman after he says he was enraged by a political ad and accused the Republican representative of "backing the Russians over our own intelligence."

Randall E. Tarr, 64, is accused of threatening Rep. Rodney Davis, R-Ill., in a profane voice mail in which he says he just saw Davis on TV, according to a criminal complaint. Identifying himself as an eight-year military veteran and "sharpshooter," the Rochester, Illinois, resident said he would like to shoot Davis' "head off," the complaint states.

The 64-year-old could receive up to 15 years in prison if convicted of communicating a threat to injure a person and making a threat to a federal official. FBI officials interviewed Tarr after his call late last month to the congressman's Decatur office, according to law enforcement.

The Washington Post could not reach Tarr Saturday, and Davis' office did not immediately respond to requests for comment.

Tarr told the Associated Press that he was angered by an ad that showed Davis claiming that Ukraine, rather than Russia, interfered in the 2016 election. It's not clear exactly what commercial Tarr may be referring to, and Davis has said there should be "absolutely no doubt" Russia interfered in the 2016 election - a stance that his spokeswoman, Ashley Phelps, underscored in statement to NBC News on Friday.

But Davis, like many Republicans in Congress, has indicated interest in theories that Ukraine also interfered in the election. This has come as GOP lawmakers try to express support for President Donald Trump, who asked Ukrainian President Volodymyr Zelensky to investigate these unsubstantiated rumors.

Trump's ask for investigations of interference, along with probes into the actions of potential Democratic rival Joe Biden and his son Hunter, is at the heart of the impeachment charges against the president.

The rumors of Ukrainian interference, which for the most part have been debunked, goes against U.S. intelligence community findings, with one former White House adviser lamenting that it plays into "a fictional narrative" promoted by the Russian government.

"I don't care if you back Trump," Tarr said in his voice mail for Davis, according to court documents. "But ... you're gonna go against our military and back the Russians?"

Defending the president amid a Democrat-led impeachment inquiry, Davis suggested to CNN this fall that Trump was pursuing legitimate questions rather than pressuring Ukraine's president to damage a political rival, Joe Biden, with investigations.

"What he was asking about was, are you in - are you sure that Ukraine didn't have any role in the 2016 election interference?" Davis said, discussing the president's phone call to Ukraine's president. "That's something that I thought all of us, the Republicans and Democrats, wanted to look into."

Tarr told the AP that does not own a weapon and wishes he could "take it all back and just say he's a lousy (expletive) for backing the Russian theory."

Davis spokeswoman Phelps told NBC that the congressman has not run ads recently, and a veteran's group's spot criticizing the representative does not specifically discuss election interference, saying instead that Davis must "hold the president accountable for risking our national security and abusing his office to benefit himself."

Tarr has been released from custody but remains under home detention and location monitoring, according to the Justice Department. He is also forbidden from contacting alleged victims or witnesses and subject to drug and alcohol screening as well as mental health evaluations.

His next court appearance is Tuesday, the Justice Department says.

In a statement to local news station WAND 17, a Davis spokesperson referenced the 2017 shooting at a congressional baseball practice that left four wounded as Davis played with other members of his party.

"After the shooting on the baseball field two years ago, our office takes every threat seriously," the spokesperson said.