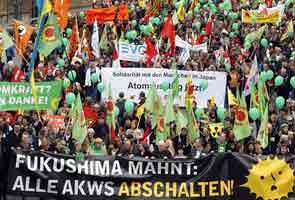 Tokyo: Japanese officials continued to battle a spreading contamination problem at the Fukushima nuclear complex on Sunday, saying that water pooling inside one of its reactors and the seawater just outside the plant were showing sharply increased levels of radiation.

The Nuclear and Industrial Safety Agency said that water seeping out of the crippled No. 2 reactor building into the adjacent turbine building contained levels of radioactive iodine 134 that were about 10 million times the level normally found in water used inside nuclear power plants.

The higher levels may suggest a leak from the reactor's fuel rods -- from either the suppression chamber under the rods or various piping -- or even a breach in the pressure vessel that houses the rods, the Japanese nuclear regulator said.

Sunday's developments came after the world's chief nuclear inspector said that Japan was "still far from the end of the accident" that struck the plant. Yukiya Amano, the director general of the International Atomic Energy Agency, acknowledged that the authorities were still unsure about whether the reactor cores and spent fuel were covered with the water needed to cool them and end the crisis.

Mr. Amano, taking care to say that he was not criticising Japan's response under extraordinary circumstances, said, "More efforts should be done to put an end to the accident."

More than two weeks after the devastating earthquake and tsunami, he cautioned that the nuclear emergency could still go on for weeks, if not months, given the enormous damage to the plant.

Tetsuo Iguchi, a professor in the department of quantum engineering at Nagoya University, said that at the sharply elevated levels of radiation found Sunday, workers would be able to remain on site for only about 15 minutes before health considerations required them to leave, further complicating work.

"First, Tokyo Electric has to figure out where the leak is coming from," he said, "then they've got to isolate the water somehow. It's a difficult task."

Hidehiko Nishiyama, the deputy director-general of the Japanese nuclear safety agency, said that it was likely that radiation was leaking from the pipes or the suppression chamber, and not directly from the pressure vessel, because water levels and pressure in the vessel were relatively stable.

The operator of the Fukushima Daiichi nuclear plant, Tokyo Electric Power Company, said its analysis of the water in the No. 2 unit had identified radioactive isotopes of cesium, iodine, cobalt, molybdenum, technetium, barium and lanthanum. The company has not yet been able to determine the source of the leak.

Michael Friedlander, a former nuclear power plant operator for 13 years, said that the discovery of extremely high levels of radioactive iodine may not necessarily mean new problems at the reactor.

It is not easy for any liquid to travel from the reactor building to the adjacent turbine building. There are only two pipes that connect them, and they have many valves along them that should have closed automatically after the earthquake and before the tsunami arrived.

Another possible contributor of highly radioactive iodine lies in the various piping and equipment that is located in the turbine building itself, and which may have been damaged during the tsunami or earthquake. The most important of these systems is the large tank full of highly radioactive water that, during normal operations, condenses steam from the reactor back into water that can be sent back into the reactor.

"That's hundreds of thousands of gallons that were just sitting there" in the turbine building and may have leaked, Mr. Friedlander said.

Mr. Nishiyama also said that radioactive iodine in seawater just outside the plant had risen to 1,850 times the usual level on Sunday, up from 1,250 on Saturday.

"Radiation levels are increasing and measures need to be taken," he said, but added that he did not think there was need to worry about high levels of radiation immediately escaping the plant.

The Japanese government's top spokesman, Yukio Edano, told an afternoon press briefing Sunday that it appeared the radioactive puddles had developed when the No. 2 unit's fuel rods were exposed to air, but that "we don't at this time believe they are melting. We're confident that we are able to keep them cool."

All Sunday, the government and company officials fielded questions from the Japanese media about whether plutonium might have escaped from one of the damaged facilities. Mr. Edano said the area around the reactors was being tested for plutonium, but "this is not an easy process." He said that if the presence of plutonium was confirmed, "we will take measures depending on the situation."

Elsewhere in the crippled facility, workers were trying to start pumping fresh water into the cooling systems of the No. 1, No. 2 and No. 3 units, a switch from the saltwater they had been using. They were also trying to power up the central control room of the No. 4 unit.

Separately, the I.A.E.A., citing data from the Japanese authorities, reported that two of three workers who were exposed to radioactive water on Saturday suffered "significant skin contamination over their legs."

"The Japanese authorities have stated that during medical examinations carried out at the National Institute of Radiological Sciences in the Chiba Prefecture, the level of local exposure to the workers' legs was estimated to be between 2 and 6 sieverts," the I.A.E.A. said on its Web site.

"While the patients did not require medical treatment, doctors decided to keep them in hospital and monitor their progress over coming days."

Meanwhile, radiation in the Tokyo water supply continued to diminish on Sunday, the authorities said. At two of three monitoring stations operated by the municipal waterworks bureau, there was no radiation detected. At a third, the level was 27 becquerels per kilogram, well below the maximum recommended limits for both infants and adults.

The elevated levels of radiation at and around the Fukushima plant will require careful monitoring of seafood in Japan, said Kimberlee J. Kearfott, a professor of nuclear engineering and radiological sciences at the University of Michigan.

"Iodines, cesium and strontium are concentrated in other types of seafood," she continued. "Fish can act like tea or coffee presses. When you push down the plungers, the grounds all end up on one side. In this case, that is the fish."

Promoted
Listen to the latest songs, only on JioSaavn.com
She said an example of this phenomenon occurred after the Chernobyl disaster, when specific radionuclides were concentrated far away in Norwegian lichens. Reindeer ate the lichens, concentrating it again, a danger to the native peoples whose diet includes a large amount of reindeer meat.

Japan's National Police Agency said on Sunday that the death toll from the March 11 quake and tsunami had risen to 10,668 persons, with 16,574 still missing.