Putin "Probably" Involved In Assassinations, "Not In Our Country": Trump

Trump, however, appeared to dismiss the gravity of those actions, noting that they have not taken place in the United States. 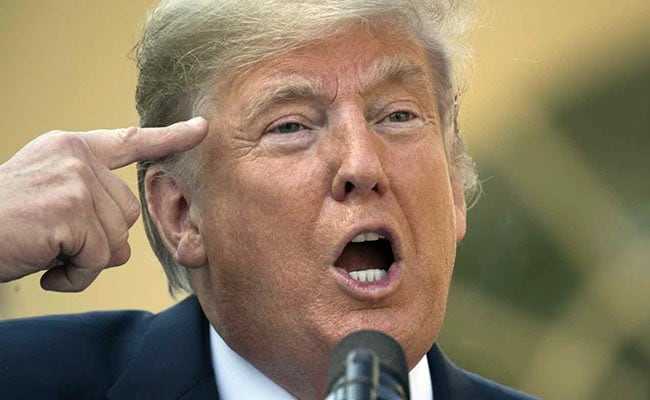 President Donald Trump said he believes that Russian President Vladimir Putin "probably" has been involved in assassinations and poisonings, but he appeared to dismiss the gravity of those actions, noting that they have not taken place in the United States.

"Probably he is, yeah. Probably," Trump told CBS' Lesley Stahl when asked during an interview on "60 Minutes" whether he thinks Putin is involved "in assassinations, in poisonings."

"But I rely on them; it's not in our country," Trump added.

A long line of Russian dissidents, journalists and others critical of Putin have been poisoned or died under mysterious circumstances; in one of the most recent cases, Sergei Skripal, a former Russian spy, and his daughter were poisoned in Britain, allegedly by Russian operatives. Russia denies any involvement in the attack.

Trump's remarks echoed recent comments he made about Washington Post columnist Jamal Khashoggi, who is missing. Trump has vowed "severe punishment" for Saudi Arabia if the United States determines that Saudi agents killed Khashoggi, but he also has noted that the columnist's disappearance "took place in Turkey, and to the best of our knowledge, Khashoggi is not a United States citizen."

Trump acknowledged that Russia interfered in the 2016 presidential campaign, but he sought to blame other countries, as well.

"They meddled. But I think China meddled, too," he said.

He later ridiculed the notion that his campaign would seek help from Russia.

"Do you really think I'd call Russia to help me with an election? Give me a break," Trump said. "They wouldn't be able to help me at all. Call Russia. It's so ridiculous."

The interview marks Trump's first appearance on "60 Minutes" as president. He previously was interviewed for the program as president-elect in November 2016.

In the occasionally combative interview Sunday, Trump touched on a wide range of topics, including his relations with North Korea, NATO and the news media.

Trump declined to say whether he will fire Attorney General Jeff Sessions, saying only that "we'll see what happens come midterms." He also declined to say that he will not end the Russia investigation led by Special Counsel Robert Mueller, although he said he does not intend to do so.

On relations with Europe, Trump said that the United States has "been the stupid country for so many years," and that although he "will always be there with NATO," the other partners in the alliance "have to pay their way."

Asked what his biggest regret has been as president, he first said that the media "treats me terribly." When Stahl thenasked what his biggest mistake has been, he pointed to the fact that he did not act more quickly to renegotiate the North American Free Trade Agreement.

He also defended a speech he delivered this month in which he mocked Christine Blasey Ford, the psychology professor who accused Brett Kavanaugh of sexually assaulting her when the two were teenagers before he was confirmed as a Supreme Court justice.

"Had I not made that speech, we would not have won," Trump told Stahl. He added that he "didn't really make fun of" Ford and "was just saying she didn't seem to know anything."

The "60 Minutes" interview, which was recorded Thursday, comes as Trump has stepped up his media appearances in the final stretch before the November midterm election.

Last week, he had more than half a dozen interviews and informal Q&A sessions with reporters, including a freewheeling 45-minute phone call with "Fox & Friends," a chat with reporters aboard Air Force One and a surreal Oval Office meeting with rapper Kanye West. This week, he has an interview with Fox Business Network's Trish Regan that is set to air Tuesday night.

Cable networks have begun easing off on their coverage of the president's campaign rallies. Trump headlined four Make America Great Again rallies during each of the past two weeks; he will hold three more this week in Montana, Arizona and Nevada.

A Washington Post-ABC News poll published Sunday showed that voter enthusiasm is up sharply from where it stood four years ago, with the increases greatest among Democrats, young people and nonwhite voters. Eighty-one percent of registered Democrats say they are "absolutely certain to vote" in November, compared with 63 percent in 2014. Seventy-nine percent of Republicans and 72 percent of independents say they plan to vote.

At the same time, Trump's approval rating has slightly improved since the summer, with 43 percent of registered voters approving of the job Trump is doing as president and 53 percent disapproving.

In the interview, Trump said he is unsure whether Defense Secretary Jim Mattis will leave the administration and described him as "sort of a Democrat," amid reports of friction between the two.

Trump said that he has a "very good relationship" with Mattis and that the two had lunch together "two days ago," but the president added that "it could be that he is" leaving.

"I think he's sort of a Democrat, if you want to know the truth," Trump said. "But General Mattis is a good guy. We get along very well. He may leave. I mean, at some point, everybody leaves. Everybody. People leave. That's Washington."

Mattis has often publicly walked back some of Trump's more controversial statements on foreign policy, and the two have a strained relationship, longtime journalist Bob Woodward, an associate editor at The Washington Post, reported in his book "Fear."

In one episode, Woodward reported, Mattis described Trump as having the understanding of "a fifth- or sixth-grader" after a National Security Council meeting. In another episode, after Trump said he wanted to have Syrian President Bashar Assad assassinated, Mattis reportedly agreed but later told an aide, "We're not going to do any of that."

Mattis has denied making disparaging comments about Trump, and the president said last month that the retired general was "doing a fantastic job."

Trump sparred at times with Stahl during the interview, declaring twice, "I'm not a baby," and one point growing testy when Stahl tried to interrupt him to ask a question.