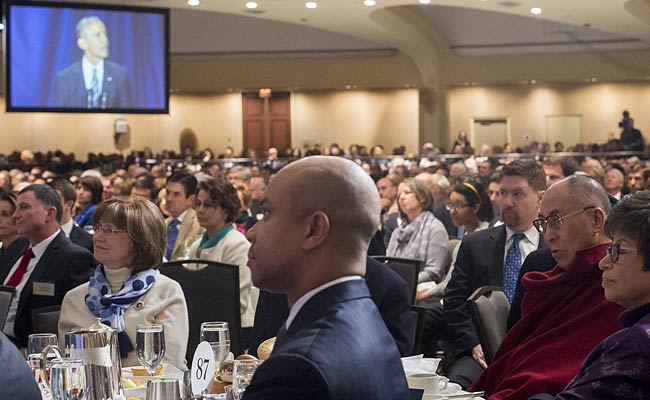 Prayer breakfast speeches in Washington are rarely, if ever, the source of bruised feelings overseas. Not so this year.

President Barack Obama's comments at this week's religious gathering not only caused domestic problems - offending some conservative American Christians, who objected to the reference to "terrible deeds" during the Crusades - but have also left China and India piqued. The Chinese objected to the warmth shown to the Dalai Lama, while an Indian official reacted to the president's remarks about acts of religious intolerance in the country by noting that India (read: not the United States) had openly supported the Dalai Lama for decades.

For both India and China, Obama's remarks Thursday may have come as something of a surprise.

Just over a week ago, Obama completed a three-day visit to India aimed at reinvigorating a frayed relationship. And until this week, China and the United States had worked out a reliable pas de deux over the Dalai Lama, 79, the Nobel laureate and Tibetan spiritual leader whom Beijing sometimes describes as a "wolf in sheep's clothing."

It goes like this: Chinese leaders warn the White House against granting the Dalai Lama a public audience, and the U.S. president either ignores the threats of diplomatic fallout or finds a way to meet that will result in the least offense to Beijing.

Since taking office, Obama had met with the Dalai Lama on three occasions, each time within the privacy of the White House rather than during the kind of public event that might prompt outsize indignation on the part of Chinese leaders. Then, Thursday, Obama was handed a diplomatically novel way to express his admiration for the Dalai Lama when the two exchanged greetings at the annual National Prayer Breakfast in Washington and the president described him as a "good friend."

Obama described the exiled Buddhist leader, who lives in India, as a "powerful example of what it means to practice compassion," one "who inspired us to speak up for the freedom and dignity of all human beings."

Both men were invited guests, but the highly public event infuriated Beijing, which accused Obama of cynically orchestrating the encounter and suggested it was meant to complicate China's governing of Tibet, a strategically pivotal region that has bridled at Beijing's rule since Communist troops invaded in 1950.

"We oppose any foreign country allowing the Dalai Lama to visit, and oppose any country using the issue of Tibet to interfere in China's internal affairs," Hong Lei, a Foreign Ministry spokesman, said Friday.

The state-run news agency Xinhua was more colorful. "This action by the U.S. to 'drive a nail' into the hearts of the Chinese people is harmful to the political trust between the two countries," it said Friday.

The Indians' reaction was more muted, but the incident may take away a bit of the shine on the relationship after Obama's recent visit, when there were displays of friendship that included two embraces between the countries' leaders.

Obama had managed a difficult feat while there: delivering a carefully calibrated speech that called for religious tolerance without kicking up a fuss with his hosts, despite the sensitivities in India on the subject. The topic is an especially delicate one for India's prime minister, Narendra Modi, who was put on a U.S. visa blacklist in 2005 over his handling of deadly religious riots in the state he then led.

But Thursday, Obama returned to the theme, saying that in recent years India had seen "acts of intolerance that would have shocked Gandhiji."

This time, Indian news channels ran the story as top news, and two senior ministers issued public remarks. Finance Minister Arun Jaitley talked about India's supportive relationship with the Dalai Lama - alluding, it seemed, to the fact that the United States treads gingerly in its support for the Tibetan leader, aware of China's disapproval.

Open resentment was issued from other quarters, including Hindu activists, some of whom accuse Christian missionaries of aggressive conversion campaigns and who had, until now, gone along with Modi's outreach to the United States. A leader of the Vishwa Hindu Parishad, a far-right-wing group, called Obama "a stooge of the church."

Promoted
Listen to the latest songs, only on JioSaavn.com
"Obama seems to like his natural allies more than his friend," the group's joint general secretary, Surendra Jain, said Friday, presumably referring to Modi.

An article in The Times of India called Obama's words "an embarrassing smackdown" for a country that had received him "with euphoria."
© 2015, The New York Times News Service
Comments
Barack ObamaDalai LamaIndiaChina