People Getting Tattoos Of Will Smith Slapping Chris Rock, Internet In Splits

The Will Smith-Chris Rock showdown at the Oscars spawned a whole lot of memes online. Indian dairy brand Amul also joined the list with its own spoof. 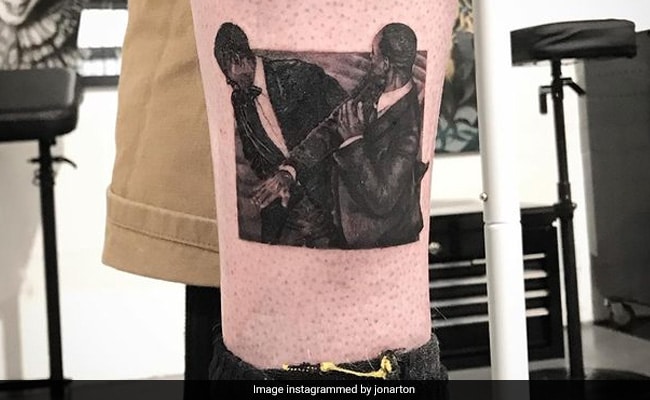 The tattoo of Will Smith's infamous outburst on a person's leg.

Will Smith would like to forget the now viral slap he gave to comedian Chris Rock at the Oscars, but some people are planning to make it a permanent memory. They have approached tattoo artists who find the idea extremely funny.

“I thought, let's do it. It's hilarious,” Birmingham based tattoo artist Jon Arton told SWNS. “It's quite small and discreet - if it wasn't I probably wouldn't have done it,” the 36-year-old said.

He spoke to British radio station Heart and said making this tattoo is the weirdest request he has received so far. But he happily obliged, tattooing the infamous outburst on a customer's leg.

But Arton is not the only tattoo artist who has received such request.

His followers and other Instagram users posted hilarious comments.

“Damn. Ya'll work quick!” said a user. “I have no words,” added another with laughing out loud emojis.

Similarly, Italian tattoo artist Giovanni Bracciodieta even added motion lines to emphasise that the slap was heard around the world.

The Will Smith-Chris Rock showdown at the Oscars spawned a whole lot of memes online. Indian dairy brand Amul also joined the list with its own spoof.

Smith, sitting in the front row at the Oscars, got upset by a joke cracked by Rock about his wife's tightly cut hair. “Jada, can't wait for GI Jane 2” - a reference to Demi Moore's appearance in the film “GI Jane”.

Smith stood up from his seat, walked up to Rock and delivered a hard smack.

His wife Jada Pinkett Smith, who is also an actress, suffers from alopecia, and publicly revealed her diagnosis in 2018.

Smith later apologised, but the Academy initiated action against him and the actor resigned from the body that awards the Oscars.