Palestinian-American Positioned To Be First Muslim Woman In US Congress

Rashida Tlaib, 12 years after Minnesota's Keith Ellison became the first Muslim in the US House of Representatives. 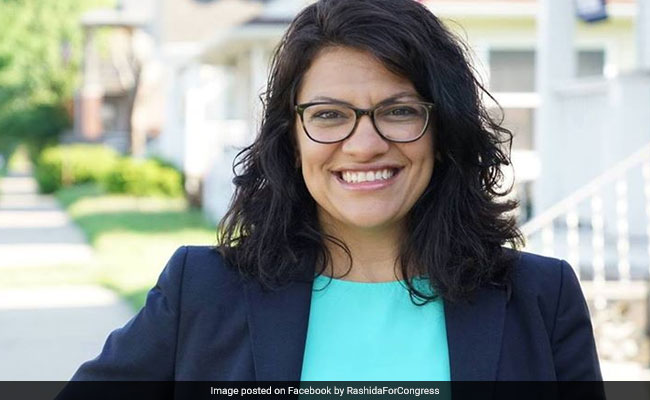 Rashida Tlaib, a mother of two and daughter of Palestinian immigrants once detained for disrupting a Donald Trump speech, made history on Wednesday, poised to become the first Muslim woman in US Congress.

The 42-year-old former social worker won a Democratic primary in Detroit safe seat. With no Republican or third-party candidates, she is positioned to enter the House of Representatives after November midterm elections.

"Thank you so much for making this unbelievable moment possible. I am at a loss for words," she tweeted. "I cannot wait to serve you in Congress."

She would also be the first Palestinian-American woman elected to the House. Representative Andre Carson, elected in 2008 and from Indiana, is the only other Muslim currently in Congress.

Tlaib is one of scores of Muslims and hundreds of women running in record numbers in elections up and down the country this year, most of them part of a groundswell of Democratic opposition to the Republican president.

Video footage shared on social media showed an emotional Tlaib surrounded by ecstatic supporters and hugged by her mother, who comes from a village in the West Bank, where extended family were cheering her on.

"They're glued to the TV. My grandmother, my aunts, my uncles in Palestine are sitting by and watching their granddaughter," she said tearfully.

She has called Trump's election a "bat signal" for all women and described her run as very personal, motivated by her sons' anxiety about being Muslims amid increased Islamophobia in America.

The Pew Research Center estimates that around 3.45 million Muslims live in the United States, making up about 1.1 percent of the total US population.

"Me being elected is a big message to the whole country that we are part of the government. We are part of society and that we want to give back just like anyone else," Tlaib told CBS News last May.

"'Clear out the room boys, let's put some women there... Let's deal with all these crises that we have in our country. It's about time that maybe we get an opportunity to take a stab at it'," she added.

She now stands to replace 89-year-old John Conyers, who resigned after 52 years in the House following sexual harassment accusations. Her two-year congressional term is scheduled to start in January.

Twenty-eight-year-old political novice Alexandria Ocasio-Cortez, whose own insurgent win in a New York primary jolted the Democratic establishment in June, was among those who congratulated her on Wednesday.

Born and raised in southwest Detroit, Tlaib was also the first Muslim woman elected to the Michigan state assembly, serving from 2009-14. She has a law degree and has worked as an attorney for social justice.

Sally Howell, director of the Center for Arab American Studies at the University of Michigan-Dearborn who has known her for 25 years, described Tlaib is "tough, capable and hard-working" and "very charismatic."

"She cares about people, about the community she grew up in," Howell told AFP.

"She was not running as a Muslim per se, but as someone from southwest Detroit... who happens to be a Muslim. But her campaign was definitely picked up and championed by the Muslim community which feels greatly maligned."

In August 2016, Tlaib interrupted a Trump address in Detroit, telling him "our children deserve better" and imploring him to read the US Constitution, before being grabbed by security guards and ejected from the hall.

"My mother, so upset, 'you got arrested on national TV'," Tlaib told CNN. "I got detained. It's fine. It was the most American thing I could ever do."

But if Tlaib's seat is progressive, Trump was the first Republican president to carry rust-belt Michigan since 1988.

Three other Muslim women, in Arizona, Massachusetts and Minnesota, still in congressional races of their own, will now be hoping that a Tlaib bounce will also help blaze a way for them.

"I feel that her win is our win," candidate Tahirah Amatul-Wadud told AFP from Massachusetts. "It is wonderful to be a part of the changing face of democracy and our country."