The controversy over the electoral law language was the most recent indicator of the extreme emotional sensitivity of Islam in Pakistan - and of the growing political clout that fervent Muslim groups, including some with extremist ideologies or violent links, are wielding here. 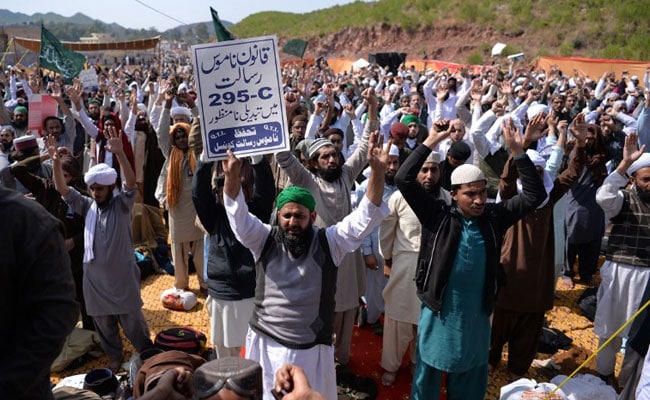 Some Muslim leaders saw a dark plot afoot to woo voters from a religious minority, the Ahmadis

Islamabad, Pakistan: Their cause seemed arcane and their slogans were far from pithy. But to several hundred protesters who rallied here for 11 days, the "finality of the prophet-hood" was an unassailable tenet of Islam, the faith followed by 95 percent of Pakistanis, and defending it was of sacred importance.

No serious threat had been posed to the belief that Muhammad, who lived in the seventh century, was the last Muslim prophet on Earth. The problem was a minor proposed change in the nation's electoral law, which requires all Muslim political nominees to affirm Muhammad's "finality." The amended version changed "I solemnly swear" to "I declare" such a belief.

But the protesters, and some Muslim leaders, saw a dark plot afoot to woo voters from a religious minority, the Ahmadis. The group considers itself Muslim but does not accept Muhammad as the last prophet; its members instead follow a 19th-century prophet, Mirza Ghulam Ahmad, who lived in India. Ahmadis have been widely persecuted in Pakistan, and they were officially declared non-Muslim in 1974.

The controversy over the electoral law language was the most recent indicator of the extreme emotional sensitivity of Islam in Pakistan - and of the growing political clout that fervent Muslim groups, including some with extremist ideologies or violent links, are wielding here.

"We are here for the love and honor of our prophet," said Siddiq Rehman, 41, a demonstrator from Lahore. "We are peaceful, but conspiracies are being hatched against the finality of the prophet-hood oath, and we will not allow anyone to disrespect our prophet and our religion, or change the oath in the name of electoral reforms. There is no place in this country for friends of enemies of Islam."

The protests ended Friday, but the controversy triggered a much wider uproar - parliamentary debates, news conferences, abject official apologies for the "clerical error," promises to investigate those responsible, and a hurried restoration of the original language.

The country of 207 million was founded in 1947 as an Islamic republic but also as a democracy that protects freedom of worship. Inhabitants include millions of Shiites, Christians and other religious minorities, but sectarian violence and persecution by extremist Sunnis - the sect of the Taliban and the Islamic State - have steadily increased in recent years.

Government officials and political leaders, eager to avoid offending Sunni sensibilities and provoking mass unrest, have gone out of their way to appease such fervent groups on matters of faith - even as they try to play down their political relevance and insist they can never come to power.

"No Muslim can even think of a compromise on the important issue of finality of the prophet-hood. It is the pillar of our faith," Interior Minister Ahsan Iqbal said. He said the protests by members of the Movement in Service to the Messenger of God, built around the defense of Pakistan's harsh anti-blasphemy laws, represented "just some small groups playing politics."

Officials of the main opposition party, founded by former cricket star Imran Khan, were also quick to condemn the language change. Shah Mehmood Qureshi, the party vice chairman, called it a "self-inflicted blunder" by the government "that jolted the whole country. I can't understand what on earth made them do this." He said the error reflected growing disarray within the ruling party since the ouster of Prime Minister Nawaz Sharif by the Supreme Court in July.

Until recently, the protesters' anti-blasphemy movement was viewed as a fringe group. Its hero is a man who assassinated a provincial governor in 2011 for defending the rights of a woman accused of blasphemy. But in the past two months, the group has stepped into national politics, running its first-ever candidates in two races for seats in Parliament.

A second right-wing religious party, affiliated with a popular cleric who once led a covert anti-India militia, also competed for the first time in one of those races, the Sept. 17 contest to replace Sharif. Both religious candidates lost to mainstream parties, but both did far better than expected.

The ostracism and persecution of Ahmadis, estimated to number about 4 million in Pakistan, is a separate religious problem in Pakistan that has intensified in recent years. In 1974, a bout of violent agitation erupted against Ahmadis, and the constitution was amended to define a Muslim as someone who believes in the finality of Muhammad. Ahmadis were declared non-Muslim, a form of legal pariah status that made them easy targets for attack and scapegoats for political gain.

Since then, Ahmadis have often been accused of blasphemy, a capital crime, and many of their places of worship have been attacked, with perpetrators rarely prosecuted. The country's first Nobel laureate, an Ahmadi named Abdus Salam who won the prize in physics in 1979, received little official recognition until last year, when Sharif renamed a university building after him. But last month Sharif's son-in-law unleashed a tirade against Ahmadis on the floor of Parliament.

Ahmadis have refused to participate in politics since being declared non-Muslim, but some Sunni leaders warned that the proposed change in the electoral law was part of a plot by the government and Sharif's party to woo Ahmadi voters. Christians were already exempt from the requirement.

"The government says it is a settled issue and the nomination form has been restored, but we want to know why this attempt to change the clause was made in the first place," said Allama Tahir Ashrafi, chairman of the Pakistan council of Islamic clerics. "Who did the government want to please? Was it aimed to favor Ahmadis?"

A leader at the recent protests, Asif Ashraf Jalali, demanded that the government punish lawmakers who "conspired" against the finality oath, fire an official who made statements supporting Ahmadis and hang Asia Bibi, the imprisoned Christian peasant woman whose blasphemy case led to the assassination of Punjab Gov. Salman Taseer.

Saleem-ud-din noted that before 1974, Ahmadis had participated in politics for decades, serving in Parliament and holding official posts. After that, he said, they were allowed to run candidates on separate "minority" ballots but decided to boycott that process. Today, there are no Ahmadis holding elected office in the country.

(Except for the headline, this story has not been edited by NDTV staff and is published from a syndicated feed.)
Comments
AhmadisProphet Mohammad