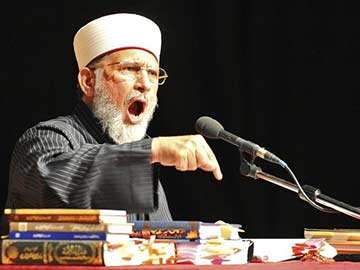 "The Inqlab (revolution) march will begin on August 14 towards Islamabad. The revolution and Azadi (freedom) march of Pakistan Tehreek-i-Insaf (PTI) chairman Imran Khan will go together," the Canada-based cleric told the participants of the Martyrs' Day in Model Town in Lahore yesterday.

Qadri was addressing supporters who had gathered at his residence to pay homage to the 14 PAT workers killed on June 17 during a police raid in Lahore.

"If I am murdered my supporters must take revenge from the Sharifs," he said.

Qadri asked his workers not to spare him or Imran Khan if they returned without bringing about a change.

"Even martyr (kill) if I return from the march without bringing about a change," he said.

He further asked his supporters to stay at his residence for three days and march to Islamabad on August 14 however, did not clarify whether he would lead the march.

Criticising the Sharifs (Pakistan's Prime Minister Nawaz Sharif and his brother Shahbaz Sharif) for killing innocent people of his party, he said, "This is the worst kind of atrocity the rulers are committing against innocent people."

"The government has besieged Model Town for the last five days. It had stopped the supply of food and medicines to the area turning it into Gaza," he said.

The rulers had violated the Article 6 thus, they should be tried for committing treason, he said.
"The incumbent rulers are enemies of the people and I wonder as to why the other state institutions are silent over their brutality," Qadri said.

"It will not be joint march. Our march will be led by Imran Khan and it will be peaceful," she said.