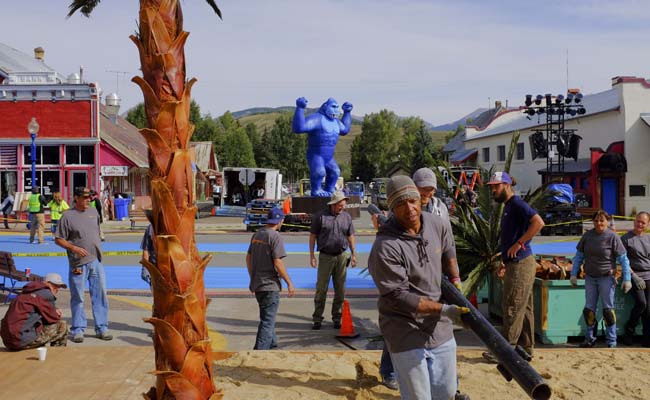 Crested Butte, Colo.: Workers have been busy in this bucolic, out-of-the-way ski town: The streets have been painted blue, as have the light poles. Blue props and fencing have been hauled in, rendering the place almost unrecognizable. And as final preparations take place for a three-day party, many residents are fuming, cursing the town for approving a clandestine deal to let a giant beer company turn it into a living advertisement in exchange for $500,000.

"This is a mistake," said David Rothman, 55, who moved to Crested Butte 20 years ago, of the decision to let Anheuser-Busch take over the town to film a beer commercial. "Frankly, it's vulgar and cheap."

On Friday, the company will fly in 1,000 young adults for a weekend of spring-break-style revelry, a stunt designed to publicize Bud Light. The town's main thoroughfare, Elk Avenue, has been adorned with outdoor hot tubs, a sand pit, concert lights and a stage. Restaurants and hotels have been stripped of many local markings and given beer-branded umbrellas and signs instead. When the filming starts, drinks will be unlimited, access to the main street will be restricted to people with company-issued bracelets, and beautiful, mountain-ringed Crested Butte will be rebranded as "Whatever, U.S.A."

"This town is already built for this exact type of event," said Nick Kelly, a spokesman for Anheuser-Busch.

Not so, say many residents. Not only do they object to the decision to rent out the town, but also to the secrecy with which the deal was arranged. Word of the agreement leaked out in late August. After a contentious town meeting and huge blowback from the community, Anheuser-Busch doubled its cash offer, which had originally been $250,000.

"This is a dangerous door to open for our little community," said Eliot Rosenberg, 26, a bike mechanic who rides with the mayor but criticized him for "letting the money talk." "Who is going to come knocking next when they know that we're open to roll over for a half-million dollars?"

Another vocal opponent is Tim Wirth, a former U.S. senator who lives here. "The town government is not elected to turn the town into a weekend beer hall, using public resources and public property," he wrote in a letter to the town council.

Town officials say they welcome the revenue and jobs the event will bring. Crested Butte's annual budget is just $10 million, and the half-million from Anheuser-Busch - which the company is calling a donation - will be used for a yet-to-be-determined capital project. As for keeping the plans secret, Mayor Aaron Huckstep said that officials were worried that news of the event would bring an onslaught of outsiders.

From his office above a pizza shop, Huckstep, in flip-flops and shorts, apologized for the secrecy but defended his decision to approve the event. "It is not every day that you have a company that comes in and says: 'We want to donate half a million to your community. We want to hire your locals. We want to work with your bars and restaurants,'" he said.

He and other residents say the event will bring a much-needed infusion of cash during the shoulder season, the time when summer visitors have left and winter ones have not yet arrived. The year-round population is only 1,500, and many people work two or three jobs to make ends meet. As in many vacation towns, affordable housing is increasingly scarce, according to town officials.

"Crested Butte is a great place to live, but it's a tough place to make a living," said Jim Schmidt, a town council member who helped approve the event. The beer company has promised to hire 300 local residents. "There's no doubt that it's going to put a lot people to work," he said.

But Rothman, a local former school principal who is also a founder of the Crested Butte Music Festival, said, "This does not fit with a place that tries to sell itself as a beautiful natural environment."

Party participants were selected from a pool of more than 150,000 people who submitted videos to Anheuser-Busch demonstrating that they were "up for whatever."

"This is a weekend that is very slow for businesses, and we're bringing in thousands of consumers," said Kelly, the company spokesman.

Critics of the event said they worried that it would be the beginning of a cultural shift that could eventually strip the town of its laid-back character. Many residents are transplants who left fast-track lives for this low-key community, a 230-mile drive from Denver over mountain switchbacks that can make ears pop. People here cruise around on wide-seated bicycles called "townies" that nobody bothers to lock up.

"We choose to live here," said Troy Wildman, 50, a cook whose salary is tethered to the tourist season. "I'd rather eat all beans all the time than live in Dallas."

Residents said they took pride not only in the town's free spirit but also in what it is not: Aspen or Vail, larger, fancier vacation towns that people here say have lost their village vibe. "We feel protective of this place," said Cassie Byrne, 22, a resident whose grandparents began visiting in the 1960s. "We don't like the big businesses, we want to keep it local."

This week, the town bustled with pre-party preparations. Employees of a local construction company dumped sand into the street. A bridge welcoming visitors to "Whatever, U.S.A." went up over Elk Avenue, right next to the heritage museum. A big, blue cowboy boot was placed in front of the mayor's office.

Huckstep said the event would be a learning experience - a way to make decisions about future plans for growth.

Promoted
Listen to the latest songs, only on JioSaavn.com
"On a micro scale, you look at the boot and you say, 'What's the big deal?'" the mayor said. Then again, he added, "It's a legitimate concern for people to say: I really value my quality of life and I'm afraid, as we allow these kinds of events to happen, we may be losing it."