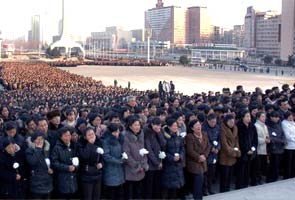 Moscow: North Koreans who did not mourn the death of "Dear Leader" Kim Jong-il can face at least six months in prison, a South Korean media outlet said Wednesday.

And those who took part in the often hysterical display of sorrow but who may not have shed "genuine tears" could be sent to re-education camps, the South Korean Daily NK website reported.

The decision follows the completion of "criticism sessions" at people's courts across North Korea. Kim died in December aged 69, after 17 years as head of the country.

Promoted
Listen to the latest songs, only on JioSaavn.com
North Korea's state-run news agency KCNA, however, accused the Daily NK website of running a smear campaign. The website usually compiles reports from defectors and people living inside North Korea.