Nobel Prize Economics: Indian-origin Abhijit Banerjee is one of awardees of the Nobel Prize for Economics

Mumbai-born Abhijit Banerjee of the US, his French-American wife Esther Duflo -- a former advisor to ex-US president Barack Obama -- and Michael Kremer of the US were honoured "for their experimental approach to alleviating global poverty," the jury said.

In two decades, their new experiment-based approach has transformed development economics, which is now a flourishing field of research, the academy said in the release.

Mr Banerjee, 58, and Ms Duflo, 46, are both professors at the Massachusetts Institute of Technology (MIT) in the US, while Mr Kremer, 54, is a professor at Harvard University.

Ms Duflo is only the second woman to win the Nobel Economics Prize in its 50-year existence, following Elinor Ostrom in 2009. The prize amount of 9 million Swedish krona will be shared equally between the three Laureates.

Ms Duflo, who is also the youngest person to ever receive the Economics Prize, told the Nobel committee in a phone interview the honour was "incredibly humbling". 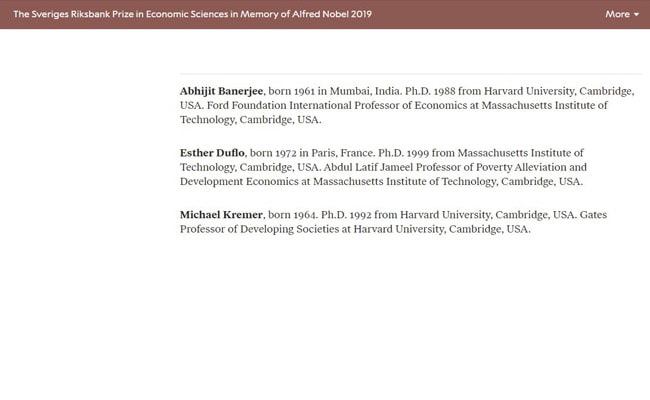 Abhijit Banerjee was born in 1961 in Mumbai, the Nobel Prize website says

Abhijit Banerjee remains one of the lab's directors, according to the MIT website. He became an American citizen in 2017.

The three will receive the prize from King Carl XVI Gustaf at a formal ceremony in Stockholm on December 10, the anniversary of the 1896 death of Alfred Nobel.