No Point In US Pursuing Syria Diplomacy With Russia: John Kerry 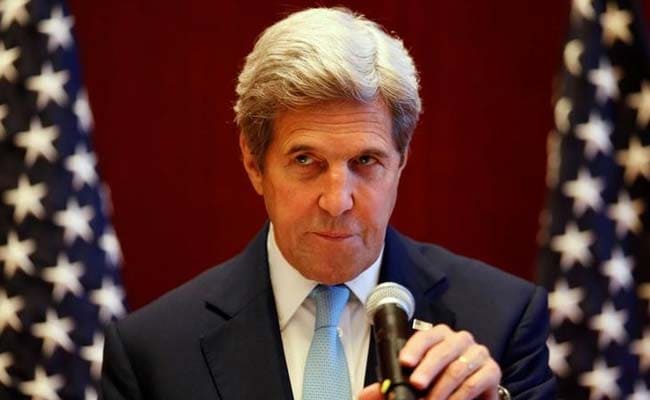 John Kerry said there is no point pursuing further negotiations with Russia over Syria.

WASHINGTON: US Secretary of State John Kerry on Thursday said there is no point pursuing further negotiations with Russia over Syria, leaving the Obama administration without a backup plan and scrambling to develop new options to stop the mounting carnage.

"We are on the verge of suspending the discussion" with Russia, Kerry said at a public policy discussion in Washington. "It is one of those moments where we're going to have to pursue other alternatives for a period of time."

Two US officials said the United States was expected to inform Russia on Thursday it was suspending diplomatic contacts on Syria, given the collapse of a jointly brokered truce on Sept. 19 and the latest violence in Aleppo.

The officials said the failure of diplomacy in Syria has left the administration no choice but to consider alternatives, most of which involve some use of force and have been examined before but held in abeyance.

"The president has asked all of the agencies to put forward options, some familiar, some new, that we are very actively reviewing," Deputy Secretary of State Antony Blinken told lawmakers on Thursday, without giving details. He said officials would "work through these in the days ahead."

Speaking to the Senate Foreign Relations Committee, Blinken said "all of the outside patrons are going to throw in more and more weaponry against Russia. Russia will be left propping up (President Bashar al-)Assad in an ever smaller piece of Syria."

The destruction in Aleppo is so great that the US should be able to assemble greater international military and logistical support and training for the embattled rebels, said one US official.

The United States and Russia are on opposite sides of the civil war. Washington has said Assad must "step aside" and has been backing some opposition groups, while Moscow intervened militarily a year ago to support Assad.

On Thursday, the US ambassador to the United Nations called the assault on Aleppo a gift to the ISIS extremist group, which has used the chaos of the civil war to seize chunks of Syrian territory.

US Ambassador Samantha Power said what Assad and Russia were doing in Aleppo was "soul-shattering."

In Washington, some officials questioned whether the United States may have been played by Russia.

"Kerry and the White House basically bet everything on the diplomatic track on the assumption that (Russian President Vladmir) Putin didn't want Russia trapped in another Afghanistan and would seek a way to avoid that," said an official privy to the administration discussions.

The Russians "were never serious about anything more than the appearance of negotiations," the official added.

"The worst part is that they used Kerry's belief in the talks to build up their forces, give Assad's guys a chance to rebuild and prepare for what we're seeing now. If you ask me, they played us," the official added.

Now, another official said, the administration once again finds itself forced to respond to a Russian initiative, as it did in Ukraine and Crimea and also is doing in cyberspace.

Promoted
Listen to the latest songs, only on JioSaavn.com
In all three areas, this official said, also speaking on the condition of anonymity, "there are no good options."
© Thomson Reuters 2016