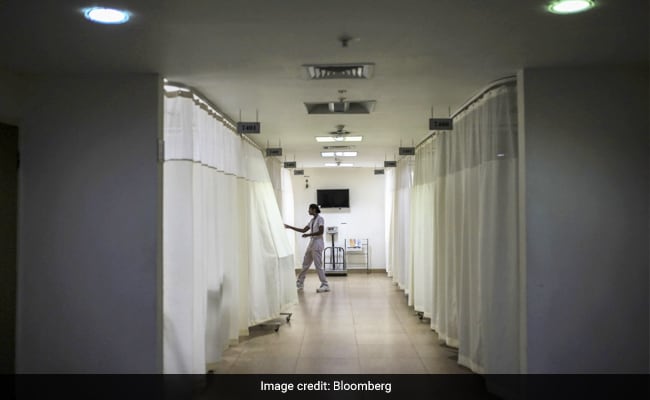 For weeks on end, Kellie McCarthy fought the ventilator pushing oxygen rhythmically into her Covid-inflamed lungs with such ferocity that she was given a slew of drugs to tolerate the invasive treatment.

Muscle relaxants paralyzed her body, while sedatives and opioids calmed her agitation. But even comatose, she was tormented mentally. The reptilian hiss of the tube in her windpipe inspired nightmares of writhing black snakes. Once, she dreamed that her doctor was trying to kill her.

The hallucinations and delirium ended when she was brought out of a coma and allowed to breathe on her own. But now, McCarthy faces new nemeses. After six weeks of strong sedatives and paralytics in the intensive-care unit, the 52-year-old suffers from post-traumatic stress disorder, muscle weakness, memory problems, anxiety and confusion. Unlike most of the tens of millions of Americans with long Covid symptoms, she's the victim of the combined after-effects of her illness and the measures needed to save her.

Mechanical ventilation, anti-inflammatory drugs and other tools of modern medicine meant that McCarthy and at least 250,000 Americans beat a case of Covid severe enough to require intensive care, sparing them lethal outcomes. But that's come at a cost, says Harvey V. Fineberg, a former dean of the Harvard School of Public Health.

"We saved many, many more than would have survived had it been 1918," the year of the influenza pandemic that killed as many as 50 million people worldwide, says Fineberg, who's president of the Gordon and Betty Moore Foundation. "That means the burden of certain types of chronic disease are going to be greater following Covid because they have survived rather than died in the acute phase."

Three-quarters of survivors of critical Covid illness develop post-intensive care syndrome - a constellation of brain, lung and other physical problems - within three months of discharge, a study published in May found. That rendered some 750,000 post-ICU patients worldwide at risk of cognitive dysfunction in the pandemic's first year alone.

Almost two years after Covid vaccines began rolling out, coronavirus patients still occupy more than 3,000 beds in US ICUs, likely adding to the disability toll. And many doctors believe that best practices for sedating patients were widely abandoned during the height of the crisis, raising patients' risk of long-term damage.

"Never in history have we had such a significant population of post-ICU survivors as Covid," says Margaret Herridge, an intensive-care doctor and researcher at Toronto General Hospital. "There wasn't a large enough critical mass of these folks for it to become a political and very huge public health issue. Now, I think it's on everyone's radar."

It was late January 2021, during an unusually warm New England winter, when McCarthy caught what she thought was a cold. Covid shots had just begun rolling out, and she hadn't yet received one. Her breathing became increasingly labored, and on Feb. 8 her husband, Jay, took her to a nearby urgent care clinic.

A normal blood-oxygen level is between 95% and 100%; McCarthy's was a life-threatening 70%. The clinic sent her straight to Sturdy Memorial Hospital, where she tested positive for the coronavirus and was intubated four days later. On March 5, her doctors performed a tracheostomy, a surgical opening in the front of her neck, to prepare her for long-term intubation.

Even then, McCarthy's attempts to breathe interfered with the ventilator, preventing her from getting enough oxygen. Doctors administered paralyzing doses of atracurium, a neuromuscular blocking agent, along with the opioid fentanyl and two sedatives.

McCarthy received the standard of care for Covid patients with acute respiratory symptoms, according to Brian Patel, Sturdy's senior vice president and chief medical and quality officer. The community hospital successfully navigated her significant medical challenges until she was transferred, he said in an email.

In 2013, the American College of Critical Care Medicine created a six-point safety checklist for managing pain, agitation and delirium in ICU patients. It encourages clinicians, Ely said, to "wake everybody up every day, go in and look in their eyes, hold their hands, talk to them, get them out of bed and have their family at the bedside."

But Covid's fearsome transmissibility undid all of that. Most patients stayed immobilized and with much less human contact.

"We weren't in the room," Ely says. "We weren't looking in their eyes. We had them sedated. We didn't have the family in the room.

When researchers surveyed ICUs around the world in mid-2020, they found implementation of the checklist had fallen below 20% from about 80% before the pandemic. One survey of 212 ICUs worldwide in a single day found that only 1% were implementing all the strategies meant to shield patients from delirium. Among the least-observed guidelines was one for spontaneous awakening and breathing trials.

One of the chief goals of the guidance is preventing the kind of delirium McCarthy suffered. It used to afflict about 80% of patients on ventilators, but the rate fell below 50% when the checklist was followed. As the pandemic went on, "delirium went through the roof, and I think dementia went through the roof," Ely says. "The key modifiable component of all of this was the overuse of the sedation."

Inflammation and blood-vessel damage induced by the coronavirus infection may also have played a role in brain injuries, Toronto General's Herridge says. But Covid patients were often difficult to assist because their struggles to breathe put them out of sync with the devices. Some pulled out their breathing tubes, cutting their oxygen supply and blasting infectious virus particles into the air, says Frederick Mihm, a professor of anesthesiology at Stanford University Medical Center.

"We had three self-extubations within 24 hours early on in the epidemic," Mihm recalls. "I said, wow, that is not going to happen again."

The solution was often to deepen sedation. In the first 48 hours after admission, Covid ICU patients were given about eight times as much midazolam and twice as much propofol, another sedative, as non-Covid patients, according to a study of two US hospitals in the first six months of the pandemic.

"I've never used drugs like this in my whole career, and it just felt completely wrong," Herridge says. "It was just like the systematic de-adoption of everything we've spent decades showing improves patient management and ultimate outcome."

After a month of intubation at Sturdy, McCarthy's condition worsened. On March 12, her husband received a call from the hospital: It was time for the family to say goodbye.

Trauma extends beyond the patient. Brenda Reed, McCarthy's mother, says she finds it difficult to talk about her daughter's illness without getting emotional. A study in France found 35% of family members had symptoms of post-traumatic stress four months after a relative was hospitalized for respiratory distress from Covid.

"Those memories are seared in my brain," Reed says. "I will hear something or see something or not even be thinking about Kellie, but it'll pop into my brain and I will start to cry. Not sobbing, not uncontrollably, but I will get very sad."

Reed contacted a funeral home and prepared an obituary. Still, she insisted on having McCarthy transferred to a bigger hospital for a possible lung transplant. The 800-bed Brigham and Women's Hospital in Boston agreed to take her. At the time, McCarthy was paralyzed and receiving heavy doses of midazolam and fentanyl, her medical records show.

"We're like, I don't think she needs a transplant, but she just needs her sedation turned off...slowly," said Daniela Lamas, the intensive-care physician who took McCarthy's case. The pandemic changed how care was delivered in the ICU, Lamas says. The repercussions of that are now becoming apparent.

"The junior doctors who trained during Covid are a lot more liberal with sedation and slow to make sure that they wake people up every day," she says. "There is a difference that we need to be careful about."

McCarthy received methadone to treat her newly acquired opioid dependence, and her sedation was gradually lowered. On March 29, she was transferred to a regular hospital ward. Four days later, a speaking valve was fitted to her breathing tube, enabling her to mutter her first words in eight weeks. She was moved to a rehabilitation center and on April 16, almost three months after falling ill, McCarthy went home.

But the damage had already been done. While her survival is a gift, she will never be the same, says her daughter, Rachel Lentz. Before Covid, McCarthy often worked multiple jobs, often putting in as many as 70 to 90 hours a week; now she can't work at all.

"I want to go back to work, but there's no possible way I could," says McCarthy, who was an insurance claims adjuster. "I can't even do math in my head anymore."

"Everyone wants that fairy-tale ending, like, 'Oh, she survived this horrific thing and everything's just back to normal and life is perfect,'" Lentz says. "It's not just something you go through and come out the other side miraculously and everything's fine. It's not. And I don't think enough people took it seriously, which is why we ended up where we did.