Austria, Belgium, Italy, Ireland, Germany, France and the Netherlands announced bans Sunday, with others expected to follow. Israel, Turkey and Saudi Arabia have also temporarily suspended flights departing from or arriving in the United Kingdom. 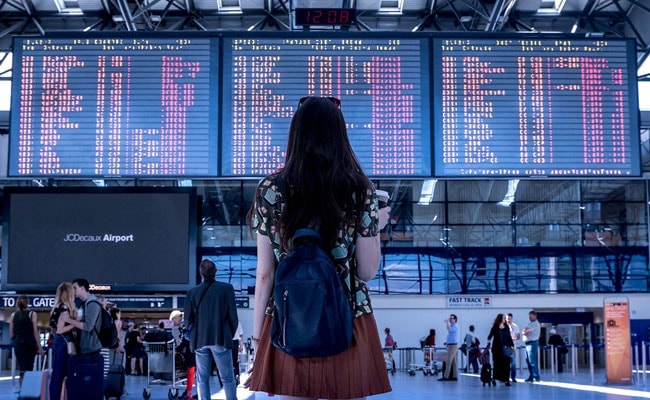 British officials have reported that a mutation of the virus appears to speed its transmission.

European countries - and some beyond the continent - are restricting travel from the United Kingdom amid mounting fears over an infectious new strain of the novel coronavirus first detected in England.

Austria, Belgium, Italy, Ireland, Germany, France and the Netherlands announced bans Sunday, with others expected to follow. Israel, Turkey and Saudi Arabia have also temporarily suspended flights departing from or arriving in the United Kingdom.

British officials have reported that a mutation of the virus appears to speed its transmission, and they have imposed restrictions on 18 million people in London and across southern England.

British Health Secretary Matt Hancock told the BBC on Sunday that "the new variant is out of control."

The new strain also has been found in Australia, Denmark and the Netherlands, the BBC reported. Italy's Health Ministry confirmed Sunday night that scientists had detected the U.K. mutation in a person who returned to Italy from Britain "in the last few days." The ministry's statement said that the person and close contacts were in isolation.

Germany planned to ban all air traffic from Britain late Sunday and review the ban on Dec. 31, the German Embassy in London announced. Irish Transport Minister Eamon Ryan said his nation will impose 48-hour restrictions on flights and ferries from Britain starting Monday and review the regulations Tuesday. "There is an exception for goods traffic and essential supply chain workers," he told Virgin Media News.

Not so in France. That country's 48-hour travel ban, which was scheduled to start Monday, included nearly all shipments of freight as well, a stricter measure than that imposed during the first wave of travel restrictions in the spring and one that was sure to cause chaos in Britain as trucks destined for France snarled on roads.

The ban is on all travel of people - "including those related to the transport of goods, by road, air, sea or rail from the United Kingdom," the office of the French prime minister said in a statement. Only unaccompanied freight - truck trailers that are loaded onto ferries without drivers - will be allowed to continue to pass through.

The passage from Britain to France is one of the most important transport corridors in Europe, which means that food and other time-sensitive cargo may end up rotting on the side of British roads in the coming days. In a bit of dark irony, the transportation snarl is exactly what was warned if Britain cuts its last ties with the European Union on Dec. 31 without a trade deal in hand. That "no-deal" Brexit remains a risk, but the chaos may have come a few days early. The French government said that French nationals in Britain hoping to come home for Christmas may still be able to do so once the ban is lifted, and that they should get tested for the coronavirus so they can have a better chance of returning later this week.

The Netherlands was among the first to ban flights from the United Kingdom starting Sunday until at least the end of the year. Dutch health officials raised the alarm after they detected a coronavirus case with the same British strand. Belgium on Sunday ordered a 24-hour ban on flights and trains to and from the United Kingdom.

In Germany, a government spokeswoman confirmed Sunday evening that the country intends to "restrict travel options between Germany and Great Britain, as well as South Africa."

Greece issued new rules requiring a seven-day quarantine for travelers from the United Kingdom, rather than the current three-day period, The Associated Press reported. Bulgaria also announced a ban on U.K. travelers through January, Reuters reported.

The new mutation , or variant, has significantly faster transmission rates, though experts said it does not appear to be more lethal or vaccine-resistant.

"While it seems to be more easily transmissible, we do not have evidence yet that this is a more deadly virus to an individual who acquires it," Vivek Murthy, the Biden administration's nominee for U.S. surgeon general, told ABC News' "Meet the Press" on Sunday. "There's no reason to believe that the vaccines that have been developed will not be effective against this virus, as well."

He added: "The bottom line is if you're at home and you're hearing this news, it does not change what we do in terms of precautions as individuals that can reduce the spread of this virus."

Cases have spiked in Britain. Public Health England on Sunday announced 35,928 new cases; last Sunday, the figure was 18,447. Health officials said the sharp increase was of serious concern, but it was too early to know whether it was linked to the new variant. As cases mounted, Britain on Saturday announced increased pandemic restrictions, reversing earlier hopes for a more relaxed holiday period.

The news has suddenly left travelers from the United Kingdom scrambling to return home as rules change fast. Israel on Sunday afternoon announced a new ban on passengers from the United Kingdom, Denmark, and South Africa, citing fears of the new strain. In a Twitter post Sunday night, Turkish Health Minister Fahrettin Koca, noting the uptick in British infections because of the mutation, said Turkey was temporarily suspending flights to the United Kingdom. Flights were also being suspended between Turkey and Denmark, the Netherlands and South Africa, he said, but it was not clear whether those suspensions were related to the new virus strain. Saudi Arabia also announced a suspension of international flights for at least the coming week.

The Washington Post's Chico Harlan in Rome, Rick Noack in Berlin, Karla Adam and Willian Booth in London, Michael Birnbaum in Riga, Latvia, and Quentin Ariès in Brussels contributed to this report.