Toru Kubota, 26, was detained near an anti-government rally in Yangon in July along with two Myanmar citizens. 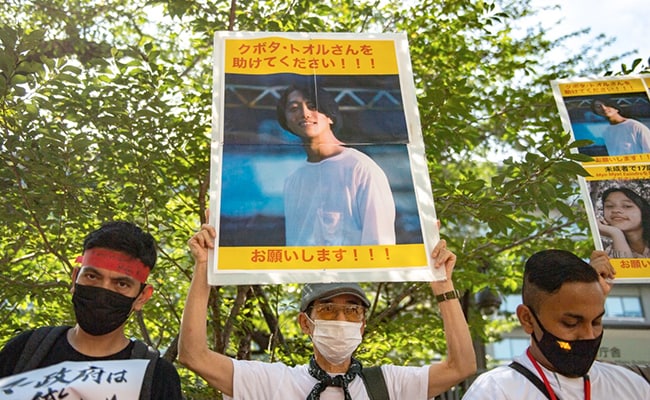 A group of activists hold up placards with images of Japanese filmmaker Toru Kubota.

Myanmar's junta has jailed a Japanese filmmaker for 10 years for encouraging dissent against the military and violating an electronic communications law, a diplomatic source told AFP on Thursday.

Myanmar has been in turmoil since the generals ousted Aung San Suu Kyi's civilian government in February last year, sparking an uprising and military crackdown that have left thousands dead.

Toru Kubota was sentenced by the court in Yangon's Insein prison on Wednesday, a diplomat at Japan's embassy in Myanmar said, adding that the filmmaker's trial for violating immigration law was "still continuing".

Kubota, 26, was detained near an anti-government rally in Yangon in July along with two Myanmar citizens.

He was initially charged under a law that criminalises encouraging dissent against the military, and with breaching immigration charges.

The dissent charge carries a maximum three-year jail term and has been widely used in the crackdown on opposition to the coup.

The next hearing for the immigration charge would take place next Wednesday, the source added.

A junta spokesman did not respond to requests for comment.

According to a profile on FilmFreeway, Kubota has previously made documentaries on Myanmar's Muslim Rohingya minority and "refugees and ethnic issues in Myanmar".

Tokyo is a top donor to Myanmar and has long-standing relations with the country's military.

In September Japan's defence ministry it will halt a training programme for members of Myanmar's military from next year over the junta's executions of pro-democracy activists.

Since 2015, Japan has received 30 members of the Myanmar military as students at facilities including the National Defence Academy.

The programme is intended to help the students acquire "correct knowledge about democracy and civilian leadership" of the military, through interaction with Japan's Self-Defence Forces, the defence minister told parliament in April.

The already isolated junta stoked further international outrage in July when it announced the execution of four prisoners, in the country's first use of capital punishment in decades.

Myanmar's junta has clamped down on press freedoms, arresting reporters and photographers, as well as revoking broadcasting licences.

Kubota is the fifth foreign journalist to be detained in Myanmar, after US citizens Nathan Maung and Danny Fenster, Robert Bociaga of Poland and Yuki Kitazumi of Japan -- all of whom were later freed and deported.

Fenster, who was held in May last year as he attempted to leave the country, faced a closed-door trial inside Insein on charges of unlawful association, incitement against the military and breaching visa rules.

He was sentenced to 11 years in prison before being pardoned and deported.